Marine Insurance is currently going through the biggest changes Daniel Morrison, national cargo product manager at NTI, has seen in his 22 years in the industry. The marine sector’s exposure has changed significantly, he says, with bigger vessels, as well as changes in the way goods are delivered and how the logistics industry operates with cargo.

But the underwriting approach hasn’t changed to match it, Morrison says. Poor profitability in the global cargo insurance market has seen reinsurers reducing capacity, changing their appetite or exiting the market altogether. And on top of all this, there’s COVID-19.

“The Australian marine insurance market handles domestic business very well, but, as with all insurers, relies on reinsurance markets – the majority of which are overseas insurers – to back us up,” Morrison says. “As they change their appetite or capacity for risks they will take on, we have to change how we do things as well. Sometimes they lose their appetite altogether. We have seen some rein-surers we relied on in the past pulling out of storage, for example – they’ve said, ‘It doesn’t make money; we’re not doing it anymore’.”

While individual insurers have made such changes in the past, Morrison says this is the first time he’s seen these types of actions across the entire market since he began his insurance career in 1998.

As insurance premiums have fallen and cargo insurance has become more commoditised, it’s become less focused on exposure and more on premium, Morrison adds – but that no longer works in today’s climate. Today’s customer is looking for something more than just a policy when they pay their premium; they’re seeking added value. Which is why NTI is trying to do things differently.

“We’re saying, ‘Let’s look at what and how we service customers, and how we can inno-vate to provide value to customers, rather than what we charge’,” Morrison says.

Cargo insurance is a specialisation a lot of customers might not understand, so the broker’s role as translator between customer and insurer is increasingly important.

“The broker must understand the customer’s needs rather than offer just an off-the-shelf product,” Morrison says. “Brokers deal with all sorts of cargo, from frozen and chilled meat to nuts and bolts to cars, and they can’t be experts on all of it – so they have access to the people within NTI who can talk them through what the policy covers and help them educate their customer about how their policy works.”

NTI also runs webinars and training sessions to upskill brokers. “We look at how we differentiate ourselves from a proposition and services perspective,” Morrison says. “We have more underwriters, more claims staff, our own internal recoveries team – that all sits within our own marine proposition and is available to all our customers.”

In its battle to stand out from the crowd, one of the strongest pieces in NTI’s arsenal is Kurt Herron. NTI’s logistics risk engineer for the marine segment, Herron is “a huge bonus to NTI”, Morrison says, pointing out that no other insurance company in the Australian marine market has a dedicated risk specialist. Herron has a logistics background and spent 15 years working in freight forwarding and shipping lines.

“I think there will be a shift, though it will be slow, towards proactive risk management,” Herron says. “Rather than going to a customer and saying, ‘I am in your warehouse; you have a light next to a fuel can, and that’s a fire hazard’, it will be more about understanding who the customer thinks they are. Just because they have a cargo policy with us may not mean they see themselves as a cargo mover; it’s just a cost of doing their business. So that proactive, holistic view of insurance makes for better engagement, so we get better buy-in from our customer. We don’t want to just be another yearly bill that you curse and then pay.”

Being proactive is important because there’s an increasingly significant factor over which cargo owners have no control – larger vessel sizes. This trend toward mega-ships presents whole new challenges.

“They are the future,” Herron says – but he adds that they’re not always safer, are harder to navigate, and groundings are more costly to deal with, as there is more cargo and fuel to salvage. So should these ship-zillas be treated diff erently to other vessels from an insurance standpoint?

“It’s the million-dollar question,” Herron says. “How do you minimise risk and expo-sure when you have more accumulation and no control? The vessels that come down to Australia, the biggest are around 10,000 TEU; t’s a mammoth task to get them in and out, as we either don’t really have the deep-water ports to go much bigger, or when we do, we’ve got infrastructure that blocks them, like the West Gate Bridge in Melbourne. So you put your cargo on a smaller vessel and take it up to Singapore; then it’s got to go to Europe and ends up on one of those massive vessels – you have no control over what vessel it goes on.”

“The broker must understand the customer’s needs rather than off er just an off -the-shelf product” Dan Morrison, NTI

Herron believes the industry has “jumped the gun a little in terms of how big these vessels have gone” – especially in light of recent serious container overboard events, like the multiple stack collapse of container ship One Apus en route from China to the US last year, which resulted in the loss of some 1,800 containers.

“In the next few months to a year, some serious questions will be asked of the manufacturers of these ultra-large vessels and their owners,” Herron says.

For Morrison, those serious questions include: “Are these ships properly tested – have we seen how they cope with increasingly extreme weather? We have greater value on a single vessel, but have we changed our underwriting approach, our limits and our ability to control that risk within our portolio? Have customers understood that even though they have, say, 10 containers leaving Melbourne on different days, when they get to Singapore or China to be shipped to Europe, they get put on one of these larger container vessels and suddenly they have 10 on one vessel? Is the policy enough to protect them if that ship sank? Policy limits are usually per loss. Are we keeping up with customer needs and industry changes?”

With shipping line reliability at an all-time low, preparedness and proactivity are more urgent than ever, Herron adds.

“As of January 2021, global schedule integrity is as low as 34%,” he says. “So, essentially, just over a third of every vessel on the water is making it to its destination on its intended arrival. Delays need to be incorporated into lead times; whether you are importing or exporting, buying or selling, you need to understand things are going to go wrong. Even the ones that are running on time can be held up berthing at ports.”

Many factors are conspiring to create a perfect storm, Herron explains. “The Maritime Union of Australia has been in EBA negotiations with every terminal in Australia. It’s unprecedented. There’s the strong winds that come with La Niña, there’s pandemic-related issues, vessel congestion, container turnaround times.”

Herron says that in the future, shipping lines will have to create a realistic buffer. “Instead of a vessel running full speed to make its arrival window, its transit time will be bumped out far enough that if they need to catch up, they can,” he says. “That’s where they get better integrity.” 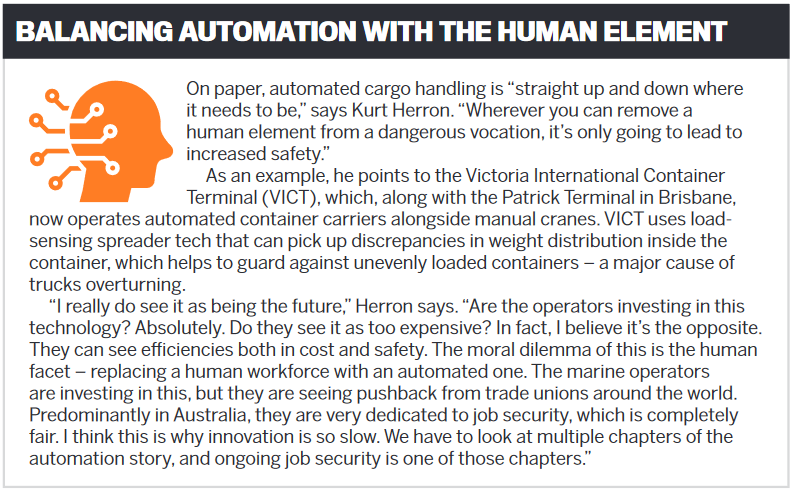 A priority on innovation

Because marine cargo insurance is a small part of very large companies’ spend, the desire to invest in technology and innovative ways to communicate hasn’t been there, Morrison says. But that’s changing. One big positive he sees is the investment in automation from the logistics industry.

“A proactive, holistic view of insurance makes for better engagement, so we get better buy-in from our customer. We don’t want to just be another yearly bill” Kurt Herron, NTI

“Now we have the investment in tech to be able to monitor containers – the ability to see where containers are at any one time, for example,” he says. “And we are only just scratching the surface. We’re looking at how we can integrate this information to add value to the customer.”

Herron says he would love to see more innovation across temperature control monitoring in containers, which would be helpful in terms of both reporting faults and minimising perishable cargo waste. He’s also excited by the significant sums venture capitalists, especially in the US, are investing in tech startups for logistics and freight.

“Then there’s the Digital Container Shipping Association looking to standardise digital documentation and technology so everyone is running off the same equipment to truly globalise everything,” he adds.

The Australian economy’s ongoing recovery from COVID-19 is also providing major opportunities in the marine space, Morrison says. The Australian government is driving economic recovery with asset write-offs and tax off sets as an incentive for companies to invest in infrastructure. This could bring up the need for brokers to revisit their clients’ policies, he warns.

“If someone has normal spending of a few hundred thousand dollars but they want to buy a multi-million-dollar machine, make sure your policy adjusts to cover that,” Morrison says. “But there’s opportunity there, and we are in a great spot to support customers through it.”

ABOUT NTI
For more than half a century, NTI has provided specialist cover for transport and logistics. Its national operations include four divisions covering marine (vessels and cargo), heavy commercial vehicles, plant and equipment, and truck assist. Each of the four divisions has its own dedicated risk engineer. For more information, visit nti.com.au.
SHARE