The green light for renewables

The Australian energy sector is, by many metrics, undergoing a massive shift. A record 26.5% of electricity in Queensland, NSW, ACT, Victoria, South Australia and Tasmania was generated through the use of renewables such as wind and solar power between September 2019 and September 2020, according to research from progres-sive think tank The Australia Institute. Meanwhile, the Clean Energy Regulator esti-mated that an unprecedented 7.0 gigawatts of new renewable capacity was installed last year as more and more Australian businesses and households opt for energy-capturing sources like rooftop solar panels.

Given Australia’s status as a so-called sunburnt country, harnessing the abundance of natural energy it is exposed to will be essential in combating the effects of climate change. According to Lee Garvey, head of financial solutions for Australia and New Zealand at Willis Towers Watson, there have been “some very interesting positive developments” in the insurance industry’s support of renewable energy projects across the Asia-Pacific region.“

The insurance industry does look to respond positively to meet ESG [environmental, social and governance] criteria these days, and as part of that, many companies are looking to reduce their exposure to coal,” Garvey says. “What this means is that they’re increasing their knowledge around energy production forms such as wind and solar. The insurance market in Asia, for example, has been very active in looking at wind farms, and having spoken to insurers in the Australian market, renewables are definitely an area of focus and growth there, too.”

With almost two decades of experience in the energy insurance sector under his belt, Ryan Mansom, head of Gallagher’s national energy practice, sees renewable energy as a segment that is “definitely starting to take on here in Australia”.

“Finding clean ways to produce energy is clearly a point of emphasis in the industry as technological advancements continue and allow this to become easier,” Mansom says. “Decommissioning of oil and gas infrastructure is also something that is going to be a big thing moving forward, and I think there’s likely to be a lot of activity in the merger and acquisitions space as well, with certain larger companies  starting  to  see  less  value in older projects and developments and resultantly offloading them to smaller companies.”

It’s  not  all  smooth  sailing  in  the  renewable  energy  insurance  market,  however.  Costs  associated  with  extreme  weather  events  and  natural  disasters  reached  $35bn  between  2010 and 2019, according to a February report from  the  Climate  Council,  which  warned  that  this fi gure could reach an unthinkable $100bn per year by 2038 if action is not taken soon.

For  John  Rae,  Willis Towers Watson’s Australasian renewable energy leader, one of the biggest issues facing a widespread  transition  to  renewable  energy  sources  in  Australia is this exposure to natural catastrophes.  An  area  like  northern  Victoria, which  Rae  says  is  “home  to  signifi  cant  renewables  infrastructure”,  has  become  one  of  the  most  bushfire-prone  regions  in  the  world, making  certain risks nearly impossible to insure.“

In Australia, we’re incredibly exposed to a lot of natural catastrophes, including cyclones, hailstorms,  floods,  bushfires  and  more,”  he  says.  “Adding  to  that  is  the  fact  that  many  renewable  projects  are  built  in  areas  of  high  wind  and  with  high  amounts  of  sunshine,  which  can  help  maximise  their  yield  but  also  brings added risk. All in all, developers need to be very aware of the risks associated with these weather  events,  since  a  natural  catastrophe  can  cause  a  level  of  damage  overnight  that takes a long time to recover from.”

Another impediment to wide-scale renewable  energy  adoption  is  intermittency,  Rae  says.  “The  vast  majority  of  new  renewable  energy  projects  in  Australia  are  wind or solar-powered  and,  as  a  result,  don’t  tend  to  produce  energy  at  a  standard  flat  rate,”  he  says.  “Other  countries  like  New  Zealand  use  hydro  sources,  which  can  react  quite  quickly  to  changes  in  demand  to  produce  large amounts of their electricity in a sustainable way. With solar and wind, there’s some-what  of  a  lack  of  reactiveness,  and  this, combined with energy network transmission issues  in  Australia,  can  lead  to  diculties  in  responding to the market’s needs.”

Though   the   occurrence   of   extreme   weather  events  in  Australia  can’t  be  eliminated,  there  are  steps  renewable  energy  producers  can  take  to  protect  themselves  against   these   and   other   risks.   Liberty   Speciality  Markets,  for  example,  recently  released a new parametric insurance product called  Weather  Index,  which  helps  protect  businesses  from  variation  in  sunshine  duration,  wind  speed  and  direction,  and  other  unexpected weather conditions.

While this type of insurance has traditionally  been  purchased  by  agricultural  enterprises,  Liberty  designed  Weather  Index  with  more diverse applications in mind, including renewable-energy-producing   enterprises   such  as  solar  and  wind  farms,  which  are  reliant  on  certain  types  of  weather,  says  Ben Hissey, senior vice president for Asia-Pacific at Liberty.

COVID-19  has  understandably  domi-nated the conversation in insurance over the last year, but I think we shouldn’t forget the impact  that  natural  catastrophes  can  have,”  Hissey  says.  “Mitigating  weather  risks  and  accurately underwriting coverage considera-tions  are  going  to  be  central  challenges  that  the  Australian  insurance  industry  will  need  to manoeuvre through.”

A sense of optimism

This  is  perhaps  most  apparent  in  the  ongoing  saga  surrounding  the  controversial  Adani  Carmichael  coal  mine at  this  point,  32  insurers,  including  HDI,  AXA  XL  and  Liberty Mutual, have indicated that they will not  provide  coverage  for  the  project,  which  is  expected  to  add  around  4.6bn  tonnes  of  carbon  pollution  to  the 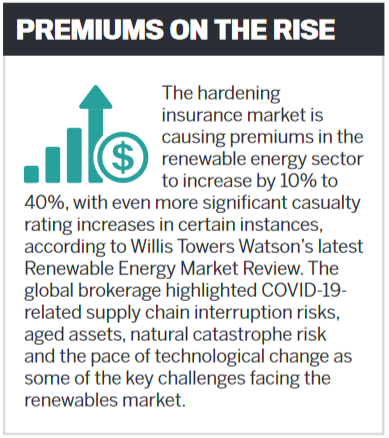 atmosphere  over  its lifetime.

In  Rae’s  view,  the  fact  that  many  leading  insurers in Australia and beyond have significant  experience  in  the  renewable  energy  sector is cause for optimism.“

We   like   to   encourage   the   dialogue   between  these  renewable  project  developers  and  their  insurers  so  that  both  sides  can  make  the  best  of  the  situation,”  he  says.  “If  they’re  working  together  and  combining  the  tools  at  their  disposal  to  effectively  mitigate any risks that present themselves, that’s going to deliver the best result.”

Ultimately,  Rae  believes  working  in  a  constantly  evolving  sector  like  renewables  is  an exciting and rewarding challenge.