View from the top

When Kimberly Jonsson applied for a job at strata specialist CHU 16 years ago – her first full-time employment after school – she never could have imagined that one day she’d be sitting in the CEO’s chair.

“To become CEO of the company where your career started is quite rare,” says Jonsson, who recently took over the reins of the under-writing agency from Bobby Lehane, who had served as CHU’s CEO since 2015.

Jonsson started her career in insurance after her first year at university – she’d worked casually at Target for five years, but when they stopped giving her hours, she needed to find a full-time job. She rose through CHU’s ranks, and by 2016 (at the age of 31), she was heading up a team of 20 as the organisation’s state manager for Queensland, a track record that netted her a spot on Insurance Business’ Young Guns list that year.

Jonsson  distinguished  herself  as  an  effec-tive  senior  manager  –  GWP  grew  by  35%  during  her  three  years  at  the  Queensland  branch – and while she calls her appointment as  CEO  a  “testament  to  the  opportunities  in  the  industry”,  she  says  her  journey  hasn’t  been without obstacles.

“It wasn’t until I started to work for Bobby that  my  age  stopped  being  an  issue  in  my  career progression,” Jonsson says. “I’m one of the  youngest  CEOs  in  insurance,  and  I  hope  my appointment demonstrates what you can achieve in such a vibrant industry.”

As  for  the  challenges,  Jonsson  sees  them  as having been necessary to her progression. “I  can  see  with  hindsight  that  those  specific  points  in  time  were  times  of  tremendous  personal growth,” she says. “If I had given up –  which  any  clever  person  likely  would  have  – I wouldn’t have had the opportunities that came after.

“You  can  never  stop  learning,  never  stop  growing.  As  the  insurance  industry  continues  to  develop  –  and  strata  insurance  is  a  very  good  example  of  this  –  to  meet  the  changing  demands  of  our  customers,  you  can continue to simultaneously develop your skills and knowledge.”

Over  16  years,  Jonsson  has  been  witness  to   much   change   and   innovation   in   the   industry,  with  digitalisation  at  the  fore-front.  Four  years  ago,  Lehane  oversaw  the  introduction  of  CHUiSAVER,  the  sector’s  first   digital   underwriting   agency,   which   he  said  was  designed  to  “pre-empt  digital  disruption”.  Now  trading  as  Flex  Insurance,  CHUiSAVER  uses  the  internally  developed  StrataTech  platform,  a  self-service  policy  and  claims  management  system  that  enables  brokers to transact business online, alongside CHU’s new internally developed rating engine and  quoting  application.  The  underwriting  platform includes commercial strata, too.

“This  is  the  first  time  brokers  have  been able  to  quote  commercial  strata  online,”  Jonsson  says.  “It’s  been  extremely  popular  since it was introduced.”

The  demand  for  tailored,  flexible  insur-ance  policies  is  growing,  and  the  need  to  simplify  the  core  strata  insurance  product  is  vital, she adds. Jonsson sees the shift toward brokers  providing  strata  insurance  contin-uing to accelerate.

“With the increasing complexity of schemes, strata insurance is – and will continue to be – an ideal avenue for brokers to demonstrate their professionalism and the power of personal advice” Kimberley Jonsson, CHU

“With the increasing complexity of schemes, strata insurance is – and will continue to be – an ideal avenue for brokers to demonstrate their professionalism and the power of personal advice to their clients,” she says.

As  for  Jonsson’s  goals  as  CEO,  she  wants  to  build  on  Lehane’s  legacy  –  to  see  through  CHU’s “strong and dynamic” strategy for the next six years, the cornerstone of which is to build an even closer relationship with brokers and their clients.

“The  increasing  complexity  of  schemes  and  changing  legislation  requiring  multiple quotes will continue to drive a shift to brokers for strata insurance,” Jonsson says. “CHU has moved  to  80%  broker  distribution  in  recent  years, which is a significant channel shift.”

Like  other  insurance  customers,  strata  owners  expect  to  have  products  that  are  tailored  to  their  needs,  so  having  the  right  technology to respond quickly and seamlessly is crucial, Jonsson says. “We want to take all of the effort out of dealing with CHU to make our service seamless, which will also enhance the service our broker partners can deliver to their clients.”

“This will have the benefit internally of not needing to re-key data. Externally, it means brokers don’t need to change what they do at their end in order to benefit from our systems. For example, they can send their own slips to multiple insurers and receive a quote straight back from CHU.”

CHU has also developed a “What is Strata Insurance?”  video  to  help  the  community  understand  this  unique  type  of  property  ownership  and  the  legislative  requirements  for insurance.

“Late  last  year,  we  translated  this  educa-tional video into Mandarin and have plans to create  more  in  di  erent  languages  in  2021,”  Jonsson  says.  “We  are  constantly  creating  strata-related  content  for  our  intermedi-aries and strata owners to help demystify the insurance  cover  provided,  identify  common  risks and how to avoid them.” 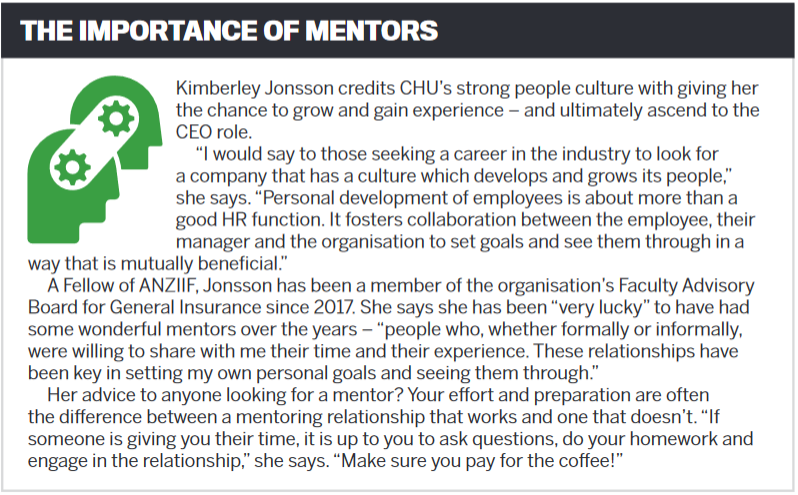 Cracks in the system

In  addition  to  COVID-19,  there  are  two  ongoing  issues  hanging  over  the  strata  sector:  building  defects  and  dangerous  clad-ding.  Trust  in  apartment  buildings  has  been  decimated  by  high-profi  le  building  defects  cases. However, Jonsson hopes the establish-ment  of  the  NSW  Building  Commission  will  shake  up  the  building  industry  and  provide  confi dence for prospective buyers.

“The  NSW  construction  watchdog  now  has  the  power  to  inspect  building  sites,  prevent  the  issuing  of  occupation  certifi-cates, call for documents and – an important feature – rectify serious defects and recovery of associated costs,” she says.

The  dangers  of  cladding  have  been  high-lighted by a few major disasters, including a February  2019  fire  that  raced  up  dangerous  cladding on the side of the 41-storey Neo200 apartment  building  in  Melbourne.  This  was  the  same  sort  of  cladding  involved  in  London’s Grenfell Tower tragedy.

The  good  news,  Jonsson  says,  is  that  apartment  owners  forced  to  replace  fl  am-mable cladding on high-risk buildings across NSW will now be able to access interest-free loans as part of a $1bn government program over  the  next  three  years  aimed  at  helping  to  resolve  the  crisis.  The  program  includes  $139m  to  o  er  technical  support  to  owners  for the remediation of at-risk buildings.

The   high-profile   cases   of   dangerous   cladding  and  other  structural  flaws  have  prompted some insurers to reduce their appe-tite  for  strata  buildings  –  running  the  risk that,  over  time,  some  strata  properties  could  become  uninsurable.  To  address  this,  CHU  has  spent  more  time  than  ever  working  with  brokers,  strata  managers  and  strata  commit-tees to ensure major defects are addressed.

“When   a   building   has   an   issue,   the   best  form  of  mitigation  from  that  building  becoming  uninsurable  is  a  proactive  strata  committee,” Jonsson explains. “This means the biggest impact a broker can have on the insur-ability  of  a  building  is  to  educate  committees  on  their  risks  and  how  building  maintenance  can impact insurance availability and pricing.”

Creating  a  company  that  is  flexible  and  dynamic  enough  to  tackle  the  needs  of  the  ever-evolving  strata  market  starts  with  hiring  the  right  people.  In  this  regard,  Jonsson  credits her predecessor with prioritising diver-sity  and  inclusion  as  a  major  plank  of  CHU’s  strategy.  This  led  to  the  company  winning  ANZIIF’s  inaugural  Excellence  in  Workplace  Diversity and Inclusion Award in 2019.

Jonsson sees diversity and inclusion as key to providing a larger spectrum of knowledge, values  and  preferences  –  not  to  mention  benefi  ting  a  company’s  ability  to  innovate,  improve  its  customer  focus  and  promote  employee  morale.  Plus,  a  diverse  range  of  skills  can  o  er  an  advantage  to  a  company  like  CHU  that  caters  to  a  multi-cultural,  multi-generational customer demographic.

A decade and a half after fi rst setting foot in CHU’s o  ces, Jonsson fi nds herself at the helm of an organisation that is working hard to  dismantle  barriers  –  including  the  ones  she herself faced. CHU’s leadership team has an  equal  gender  split,  with  ages  spanning  from 20s through to 60s, and women repre-sent 55% of all leaders at the company.

“While  diversity  has  always  been  part  of  CHU’s  DNA  and  contributed  to  our  success,  in recent years, we made the decision to focus on it as a strategic imperative,” Jonsson says. “It’s absolutely critical to our strategic success over the next fi ve to 10 years.”