Mergers and acquisitions played a big part in the insurance industry in 2014. There were eight deals worth more than $1bn as sectors contracted across the industry. The final quarter of the year saw several key moves, and industry experts expect the pace of 2014 to flow through into 2015.

While much of the consolidation was focused on the reinsurance space, there was increased activity across the broker business and in general insurance. The Deloitte 2015 M&A Outlook notes that 2015 should bring “continued acceleration of activity in the insurance M&A market”.

Companies should be prepared for entreaties by private equity firms looking to invest in insurance, other new entrants to the market from both home and abroad, and a changing regulatory landscape that could affect M&A activity.

“Global reinsurers have seen the future, and it requires greater scale … for reinsurers, the game seems likely to remain ‘eat or get eaten’ ”
– Standard & Poor’s RatingsDirect

Brokerage buyouts an uneven trend
In terms of volume, the broking sector saw its second-highest number of deals (321) in 2014, but deals within the sector are difficult to predict 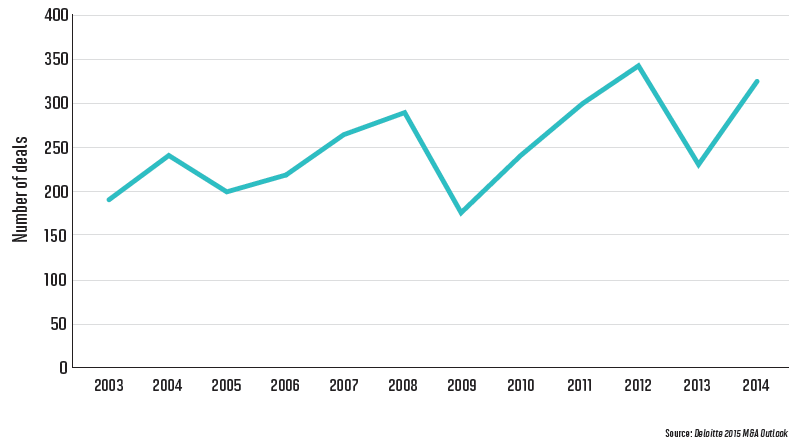 Top three dealmakers
With so much activity in the broking sector throughout the year, the top three saw major deals both at home and abroad

Broker networks continue to branch out
Australian broker networks are continuing their growth phase, with Singapore the next stop for many

60%
Austbrokers announced the purchase of 60% of leading workplace rehabilitation firm Altius Group for $13.6m in January

Average brokerage deal value drops
Even as the number of deals in the broking sector moved up in 2014, the value of those deals took a drop, on average, compared with the previous 12 months