A Champion of Innovation

In May, fintech aficionado Rita Yates was named the new CEO for Insurtech Australia, taking over the reins from co-founder and former head Simon O’Dell. The appointment was hardly a surprise – Yates has long been a key player in the space, helping to establish Insurtech Australia and sitting on its advisory board since the outset.

“Rita is a champion for innovation in the insurance industry,” O’Dell said at the time of her appointment. “She is the perfect person to lead Insurtech Australia into 2020 and beyond.” 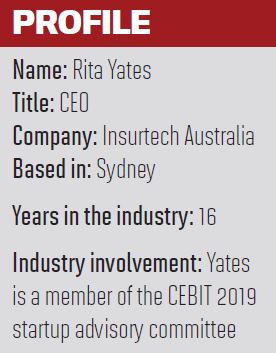 However, leading the organisation in the current environment poses a unique challenge: insurtech is still in its infancy, but the space is evolving rapidly, which means Insurtech Australia must adapt quickly in order to meet the changing needs of its members, as well as the wider insurance ecosystem.

Yates is well accustomed to a rapid pace of change. While working as the insurtech lead for Stone & Chalk, Asia-Pacific’s largest fintech innovation hub, she spent years fostering opportunities between startups and corporate Australia.

“Bridging that gap between corporate and startup Australia is certainly one of my passions and has been for some time now,” she says.

During her time in the sector, Yates has observed a huge amount of change in the Australian market, including an exponential increase in insurtech numbers.

“When we first started to think about forming Insurtech Australia, you could probably count on one hand the number of startups in Australia that classified themselves as insurtechs,” Yates says. “Now, if you look at the number of insurtechs that were registered in the last report we put together with EY, we had 48 members of our ecosystem – that’s a massive increase and an enormous change over just a couple of years.”

Despite the rapid growth, Yates says genuine disruptors in Australia have been few and far between – EY and Insurtech Australia’s report found that just 10% of the country’s insurtechs are disrupting the status quo. Importantly, it seems this message is finally sinking in with incumbents – and Yates says this has led to the second major change currently impacting the sector.

“In addition to the change we’ve seen in terms of growth, we’ve also seen change from the incumbents in that they’re much more open to working with, partnering with and investing in insurtech startups,” she says. “Now, they can really see the value in exploring those opportunities, whereas a couple of years ago, there was more of an impression that insurtechs were disruptors and were there to take business from the incumbents.”“One of the issues that comes up time and time again is that startups and corporates operate at different speed differentials,” she says. “Startups work in a very lean way – they’re agile, they test and learn, and they do things quickly – but that tends to be very different to the way much larger organisations operate.”

In contrast, she says, the sheer size and scale of many insurance companies, as well as the bureaucratic restrictions they’re under, make them unable to move as quickly as a startup.

“Large organisations like insurance companies tend to have processes that are much slower and have governance around them, which is actually very difficult to change because of the size of the organisation, so that will remain an issue.”

While that problem isn’t going anywhere, Yates believes some compromise can go a long way.

“From a personal perspective, I’d like to see more female founders – we have some great ones already, but I’d love to see more women starting insurtechs”

“There certainly are ways to attack in terms of the incumbents putting structures in place that can speed up their internal processes when working with startups and, on the flip side, startups recognising that there is going to be a speed differential when working with incumbents,” she says. “The hope is that they will meet somewhere in the middle for some wonderful mutual success, and I think the creation of our Insurtech Australia ecosystem can help that process along.”

While the environment has changed significantly, Yates says Insurtech Australia’s goal remains the same as it did when the company first launched. “From day one, our overall mission was to create a world-leading insurtech ecosystem, and that will continue to be our mission well into the future,” she says. However, Yates does have a few personal ambitions for the ongoing evolution of the insurtech sector.

From a personal perspective, I’d like to see more female founders – we have some great ones already, but I’d love to see more women starting insurtechs and working in the space generally,” she says. “I’m certainly interested in providing my support to up-and-coming potential female founders, and I think the more we grow our female role models in this space, the more effective that will be.”

“I’m keen to see the number of insurtech companies grow over the next 12 to 24 months, and fostering that growth is a key priority for Insurtech Australia, because it will inevitably strengthen the wider insurance ecosystem and lead to improved outcomes across the board.”