With more than 25 years of experience in finance, Nick Cunningham has witnessed significant change across multiple industries. Since moving to the world of insurance four years ago as CEO of Elantis Premium Funding, one of the biggest shifts he’s seen has been a considerable increase in the role the funder plays in the broker world. Customer service has moved to the forefront, helping distinguish Elantis from its peers in a tightly contested field.

The funder-broker relationship is now a closer symbiotic bond, driven in part by a softer market in recent years. Approaches such as stretching settlement days on loans to reduce the impact of the rate on a client have allowed the funder to have more security and the broker to often generate more revenue.

“You’ve got to think a bit differently about how you’re going to engage your clients, and that leads to creative solutions to reaching them. It’s definitely not an industry where you can sit back and settle into autopilot for a five-year plan”

“We saw that brokers were looking at where additional revenue streams were going to come from,” Cunningham says. “Brokers have come to a new understanding that if they work with the funder, we can actually work with an outcome where they generate additional revenue. We are obviously profitable and remain viable, but it doesn’t impact the client.” 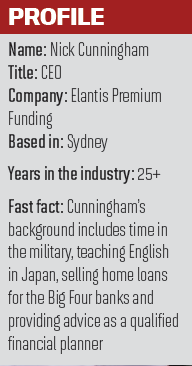 It’s no coincidence that one of the core components of Elantis’ strategy is to maintain a strong company culture. Having spent more than 15 years working in the banking sector, Cunningham is keenly aware of how quickly staff will spot any disparity between stated intent and action.

“During my days in the banks, they would say, ‘Our staff are important’, but then they would go and do something totally different,” he says. “But at Elantis, we tend to think that if our staff don’t feel valued or part of the company, that will reflect in the way they approach brokers – our customers.”

Cunningham is a firm believer that this marks Elantis out from the competition, providing incentive for staff and customers to remain with the organisation. And it’s paid dividends – Elantis recently placed in the top 20 of the 2018 Great Place to Work Awards.

“For some companies, their approach is to say, ‘Go find a new product line’ or ‘Go find a new customer base’ – we do that, too, but we specifically have significant strategy around making sure we are a great place to work,” Cunningham says. “All the leaders across the business and all the employees understand that. They have a fuller appreciation that we actively plan to make sure staff are engaged and feel valued.”

“I enjoy the fact that funding is a tightknit, boutique industry,” he says. “You’ve got to think a bit differently about how you’re going to engage your clients, and that leads to creative solutions to reaching them. It’s definitely not an industry or role where you can sit back and settle into autopilot for a five-year plan – you’ve consistently got to be looking at doing different things.”

The funding industry is currently forecast to loan around $5bn in Australia over the next financial year. It’s a staggering figure that Cunningham is understandably proud of, and he feels it’s a testament to the quality of the industry as a whole.

“Find me somewhere else in the world where $5bn is lent unsecured,” he laughs. “It doesn’t exist!”

Yet his amusement is underpinned by a serious conviction – namely, that the funding industry plays a crucial role in aiding small business in Australia. Though the public perception of business tends to be geared around large-scale international operators, this is quite far removed from the truth. In fact, SMEs make up the bulk of Australian businesses and employ around 90% of Australians.

Cunningham believes that this support for SMEs is a little-recognised facet of the funding – and, by extension, insurance – industry. With bigger banks suffering from a lack of consumer trust and frequently reluctant to provide the relevant loans, Cunningham says funders need to more overtly advertise the role they can play in aiding SMEs.

“The most important employees at Elantis are the staff who speak to our brokers regularly, solving problems and assisting however they can,” he says. “Small businesses are the lifeblood of the Australian economy. If you take $5bn in funding away from helping those small businesses pay their insurance premiums, it will have a huge impact on the viability of that space.”

While ‘disruption’ is often bandied about as a buzzword, Cunningham feels it’s a term that could soon have real meaning again, especially in light of the revelations of the financial services royal commission. Too many direct insurers have pursued profit at the detriment of the consumer, he says.

“Insurance is a very competitive industry. The great brokers who look after their customers are going to prosper and boom, as will the funders”

“When I came into the industry, there was a lot of talk around direct insurance offerings and artificial intelligence undermining the broking process,” Cunningham says. “But what we’ve discovered is that when we outsource the relationship to a direct model, it’s fundamentally flawed.”

Given the apparent issues exposed in the current system, Cunningham believes that the coming years will see a flight back to quality advice and customer service, built around individual relationships with brokers. This disruption of the current tendency toward direct insurers is likely to benefit the industry in the long run, though it will require hard work to demonstrate trustworthiness to the general public.

“Insurance is a very competitive industry,” Cunningham says. “The great brokers who look after their customers are going to prosper and boom, as will the funders.”

Indeed, Elantis is proof that the right workplace culture really can make all the difference – not just to a business, but to an entire industry.