During his long tenure at FM Global, chairman and CEO Tom Lawson has remained focused on furthering the company’s mission of mitigating risk through engineering expertise

The path to a long and successful career is often more about the journey than the destination. Long before Tom Lawson reached the upper echelons of commercial property insurer FM Global, he began at the firm as a field engineer, conducting risk assessments, providing loss prevention engineering recommendations to clients, and gaining exposure to the wide range of industries and Fortune 1000 companies to which FM Global brings value.

For 23-year-old Lawson, the experience proved invaluable, and the more he did the work, the more he enjoyed it and saw how the company’s values aligned with his own.

“Forty years later, here I am,” he says. “It’s pretty rewarding to sit back and think about it now – that you can start out as a field engineer and end up as chairman and CEO. For me, it’s been a great journey.”

In between his first position at FM Global and his current one, Lawson climbed up the ranks of the company’s engineering group and was responsible for opening a branch office as an engineering manager. He later picked up the title of underwriting manager, which was his first foray into the insurance side of the business.

“It was interesting not having any insurance experience, but the real focus was the expertise to differentiate risk, which is something that’s fundamental to everything we do in the company,” Lawson says.

Later, he created the unit that oversaw the company’s global forest products operations and eventually led the team that built the company’s research campus – the world’s largest centre for science-based property loss prevention research and product testing. It was one of the shining moments of his career at FM Global.

“Our research campus is where everything starts,” Lawson says. “It’s really a foundation for everything the company does related to engineering and underwriting. To be able to design and build a one-of-a-kind facility that is used to deliver on our value proposition was pretty important.” 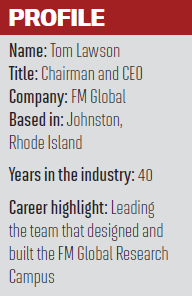 Employee of the decade

When Lawson took over the operations of the company as an executive vice president in 2008, and finally was appointed CEO in 2014 before picking up the title of chairman in 2018, he was more than prepared to lead a company whose many sides he had already seen. Today, he’s a key example of FM Global’s ability to retain its team members for an average of 13.2 years, which he credits in part to its mutual structure.

“We’re a mutual company as opposed to a stock company, which allows a singular focus on what’s best for our clients, who are actually our owners,” Lawson explains. “Unlike a publicly traded company, there’s never a conflict between what’s best for our shareholders versus our clients. It also sets the tone for our culture in the way we deal with our mutual owners, our clients. It permeates into how we deal with each other at the company and contributes to long-term relationships.”

With FM Global’s high employee retention rate, it’s clear the company is doing something right as retirements loom large over the insurance industry. Millennials get a bad rap, according to Lawson, who meets with many new employees when they join the company and says they consistently tell him they’re taught to change jobs every few years in order to advance in their careers.

“What they say is that as long as their employer is interested in their development and spends time to communicate with them, they’re not interested in switching companies every two years,” Lawson says.

A focus on loss prevention

FM Global’s capital and risk management expertise is focused on commercial property insurance, and it aligns itself with companies that share its belief in the value of loss prevention. It’s important to find clients who think the same way, Lawson says, and are willing to commit to making loss prevention a key part of their strategic planning and to taking the actions needed to make their facilities resilient.

In order to create resilient companies, FM Global’s experts start by identifying the property-related risks facing their clients and then provide them with practical solutions to mitigate exposure. The company is unique in its risk management approach in that it uses engineers, not actuaries, to help clients assess and address their property risks.

The FM Global Research Campus is devoted to stopping physical threats from becoming major catastrophes. Its four laboratories study fire technology, natural hazards, electrical hazards and hydraulics. Teams within each lab run experiments that help to develop understanding around each risk. In the fire technology lab, for example, researchers learn about the causes of structural failure, the speed at which fire spreads and sprinkler protection systems.

Natural catastrophes, business interruption and cyber attacks that demobilise physical facilities are a few of the top-of-mind risks threatening insureds today, but there’s another, often overlooked danger that Lawson believes is crucial for companies to pay attention to.

“The biggest risk that’s emerging is when you don’t make loss prevention and risk management part of your strategic planning,” he says. “I think that’s acknowledging that loss is not a foregone conclusion, and you don’t have to accept that. The majority of loss is preventable, so the good news is you can actually change your future by choosing to make your facilities and your corporation resilient.”

FM Global was founded nearly two centuries ago on the premise that members of the mutual company had to take care of their businesses’ facilities. This belief continues to underpin the insurance company’s work as it turns science into solutions for its clients around the world.