Eyes on the prize

Zurich Australia’s Rajbir Nanra talks about his first two years in the top job, as well as what brokers can expect from the Swiss insurance giant in 2018

To say that Rajbir Nanra became CEO of general insurance at a challenging time for Zurich is certainly an understatement.

Less than two months after his appointment (in September 2015), the global Zurich Insurance Group announced a thirdquarter drop in profit of 79%, with net income totalling US$207m, starkly contrasting with the US$966m figure recorded a year earlier. It was a decline largely attributed to problems within Zurich’s global general insurance business.

Since then, Nanra has been firmly focused on executing a fresh strategy. As well as leading a restructure of the local general insurance operations, that strategy has seen the appointment of new executive leaders, as well as the $741m acquisition of travel insurance provider Cover-More.

Nanra reflects on the last two years – the good times and the bad. 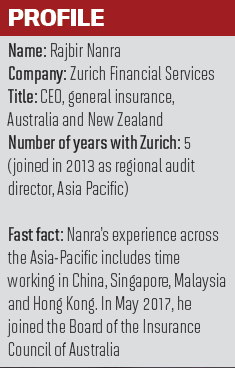 “I think probably the most difficult challenge was making the hard decisions about exiting certain lines of business,” he tells Insurance Business. (Zurich’s decision to exit the NSW CTP greenslip market made industry headlines when it was announced in December 2015.)

“It was at a time when the market was softening quicker than we expected, and to take a bold stance to remove ourselves from quite a large amount of business, I think, was very challenging to try to communicate to the market and explain why we were doing it."

“While we made a lot of hard decisions and we had to rightsize the business, we had an opportunity to rebuild a lot of the senior management and executive team,” he says. “And I think the standout for me was being able to attract great talent. We employed a new CFO [Stuart Farquharson], a new chief claims officer [Hilary Bates], and a new chief distribution officer [Steve Ord], complementing the existing senior talent in the business.”

“I think setting a new five-year strategy was very helpful for us to go to the market and communicate what Zurich was all about but, more importantly, to internally explain to our staff – after the period of … stabilising the business – where we were going to take the business in the future.”

Nanra is proud of what Zurich has offered the market in recent times in terms of flood coverage.

“Our experience during [Hurricane] Debbie was extremely satisfactory to me,” he says. “Less than 1% of our claims … were disputed. [We’re] now engaging even closer with the brokers to make sure that [we understand] how we can help, and assist and advise them with the customer [as] to what the most effective cover is.”

Work done on the claims front is another source of pride for Nanra.

“We did a lot of work around rebuilding the claims capability,” he says. “One of the standout achievements from bringing on Hilary Bates as the new CCO was improving our net promoter scores by 47% over a ninemonth period.”

Nanra believes claims are often a forgotten component of the insurance process.

“It’s the last thing we do, in terms of the whole value chain, when we talk about the customer, and that’s really what we’re here for – to pay claims,” he says.

“Hilary set about restructuring the team first, and making sure we had a very marketfacing and customer-centric team built. Once she put that team together, [she] then looked at the technology and how we could make it easier for brokers and customers to transact with us.” 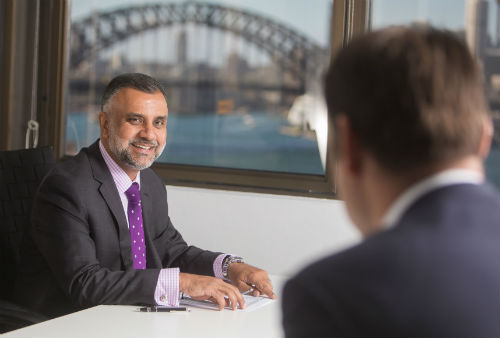 “We work very closely with our brokers now about understanding the customers’ needs. Too often we don’t listen to what the customer needs are and we try to tell them what we think they need”

“The biggest thing around claims is transparency; whether it’s commercial business, retail [or] corporate, people always want to know where we are up to in our claims. If [they] don’t hear back within 24 hours, customers get very anxious,” Nanra says.

“Z Track allows the broker and the customer to actually see where their claim is up to, [including] the file notes surrounding those claims, and so it provides them with full transparency around … the process.

“I think technology in claims is great, but providing a technology solution that provides further transparency for the customer is probably the number one priority for us. It’s what we’ve done in 2017.”

Last May, in a conversation with Reuters, Zurich’s global chairman, Tom de Swaan, said the business had begun utilising artificial intelligence in its handling of personal injury claims.

De Swaan said Zurich’s deployment of AI had, so far, saved 40,000 work hours and sped up claim processing time to five seconds, and that the group planned to expand its use of AI.

“The group actually signed an agreement with a company called Expert System for cognitive computing solutions,” Nanra says. “For me, that’s been a fantastic achievement to actually demonstrate Zurich’s commitment to move into the next century around ease of process.

“Obviously, we’re looking closely at that here in Australia. The benefit of being part of a global organisation is we will start to leverage off what they’re doing from a group perspective, and certainly that’s something we’d look to bring to Australia in the near future.”

When discussion focuses on Zurich’s relationship with intermediaries, Nanra stresses that the company’s commitment to brokers is core to its business.

“We’ve reiterated that over the last number of years,” he says.

Nanra says Zurich is looking to strengthen its commitment to brokers through the introduction of a number of programs, including one specific initiative that takes the place of its recently retired Zenith program.

“As part of our transformation, we were very clear around our appetite, and by going to market and saying that we’re only going to play in certain areas and these are the strengths we saw in the market, we’ve used 1872 to really focus that go-to-market proposition so that brokers are very clear when we come to them; they know our appetite."

In November, Zurich launched its NextGen Leadership Academy, seeking to nurture the next generation of leaders among the insurer’s key broker partners. Participants undertake learning models and presentations on a range of subjects – including risk strategy, claims, building effective teams, and business decision-making – and the highlight of the program is an international experience.

“We’re talking to our broking partners … [about] some of their up-and-coming stars and giving them an opportunity to see Zurich on a global basis, with the opportunity to even go to Zurich and spend a few days meeting our senior executives. But also [they’re] getting to understand Zurich on a global platform and bringing that back to Australia to see where opportunities exist that they may see, from their perspective, that we’re not tapping into.”

Last year, Zurich took the industry by surprise when it entered the travel insurance space by acquiring Cover-More.

“It made the group one of the leading travel insurers globally,” Nanra says.

Sticking to the strategy

When it comes to the insurer’s Australian focus over the next year, Nanra mentions growth.

“The first part of [our strategy] took us from when I took over at the end of 2015 to the end of 2016 [and] was about stabilisation,” he says. “The second part of that strategy, which is really 2017/18, is around growth, but obviously profitable growth, and in the areas that we see are our distinct positions and in which the brokers also see us as a go-to-market in that particular line of business.”

Nanra adds that his team is keen to undertake considerable further work around the customer.

“We work very closely with our brokers now about understanding the customers’ needs. Too often we don’t listen to what the customer needs are and we try to tell them what we think they need,” he says.

“We have a very clear strategy; we’re sticking to that strategy; we’re executing … We have a clear engagement process now set up with our key stakeholders – that is, the market, our customers and, more importantly, our staff. I think now all three understand where we’re heading, and therefore our decision-making process is a lot easier.”

Nanra is excited about times to come.

“I’m looking forward to 2018. We are seeing the market start to harden, and I think Zurich is well set up to take advantage of the market as it starts to stabalise."