Before she took the reins as Zurich’s group chief risk officer in September 2017, Alison Martin’s CV didn’t contain any risk management roles. Following her law studies, she fell in love with insurance while working in insurance audit and consulting at PwC. From there she moved to Swiss Re, where she explored almost every corner of the business, quickly learning about underwriting, pricing, costing, reserving, RND and claims, before ascending to the role of chief financial officer. So when she took on the role of chief risk officer at Zurich, she was confident that the lessons she’d learned from her previous roles and the risks she’d taken had adequately prepared her for the job.

“To me, I have taken risk on the first line all the time,” she says. “What I have done throughout my career is take risk. That means you manage risk – you have to have risk awareness, you have to understand the kinds of risks that exist, what could be your downside as well as your upside, and you need to think about what your mitigating actions are. So now, on the second line, I can use all the knowledge I’ve had of taking risk to help the risk team here at Zurich think about how we can help the first-line team do appropriate risk-taking as efficiently and effectively as possible.” 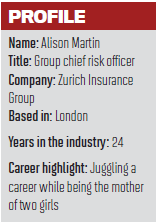 Drawn to Zurich by the opportunity to try something new, Martin also passionately believed in the vision that group CEO Mario Greco was setting out for the company.

“I really believe in the transformation of the insurance industry and how Mario speaks about that – and, more importantly, the actions he has put in place to have Zurich very well positioned in that transformation,” she says.

She explains that Zurich doesn’t want customers to simply pay a premium and never think about their insurance again. The company wants to move to a model where instead of being an annoying burden, insurance is a value-add service that customers enjoy having as part of their lives – and the company is taking action to make this happen.

As group chief risk officer, Martin has also been instrumental in the World Economic Forum’s most recent Global Risk Report, which Zurich helped to produce in partnership with Marsh & McLennan. The report’s findings on climate change, cybersecurity and geopolitical tension made headlines around the world as the World Economic Forum called for action from governments and business.

“It should be seen as a great wake-up call to government, to companies, to society at large as to what the risks are that we face in society generally, and to business specifically,” Martin says.

Not surprisingly, extreme weather events were the most likely risk highlighted by the report. For insurers, many of whom are seeing increases in these events and therefore a surge in claims in the aftermath, the report presents a number of thought-provoking issues – some of which they can tackle by leading by example.

Zurich has taken steps in the environmental space, for example, by choosing to not insure coal plants or invest in companies that derive more than 50% of their revenue from coal. And Martin is very firm on her position on climate change.

“Particularly worrying for me is that [the number-two risk] now is the failure of climate change mitigation and adaptation – i.e. the failure of policy to do anything about the risk – and extreme weather events is number one,” she says. “As an insurer, those two things are a little worrying.”

The other major area insurers must keep an eye on, Martin says, is cyber risk. Although it seems very different than environmental risk at first glance, Martin believes the two are actually very similar in a lot of ways.

One of Martin’s other passions is raising awareness around diversity, the lack of which continues to haunt the industry.

“The insurance industry is probably no poster child for diversity, but Zurich I think is a good poster child,” she says. “We’re not perfect, but if you look at the changes that Mario has made over the last couple of years alone, he has radically shifted the executive committee’s composition, so we have much better gender diversity.”

These changes, she says, can help to shift the culture in an organisation and send strong signals of support. Martin is also part of Zurich’s women’s innovation network, and she works hard to ensure she helps other women in the firm.

“I take the role model part of the position very seriously,” she says. “I think it’s very important that, if you have that ability to influence others coming through their career, you take that opportunity. I think that sends a really strong signal to the whole organisation, but more importantly to the industry at large, that you can be successful – and, in fact, you are more likely to be very successful – if you have diversity.”