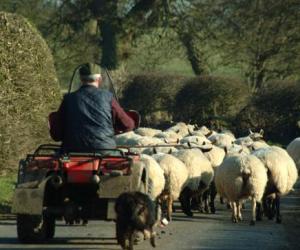 An ATV used for farming purposes doesn’t need to be insured, even if it uses a public road briefly to access the farming property, the Ontario Superior Court has ruled.

The decision will come as news to brokers and insurers alike, as the industry has generally maintained that ATVs come under Ontario’s Compulsory Automobile Insurance Act when they leave a farmer’s property and access public roads.
In fact, in Matheson et al. v. Lanark Mutual Insurance Company, the plaintiff Arthur Matheson ignored his broker’s advice to purchase insurance for his ATV.
Matheson told the court his ATV was used for farming only, and therefore his “self-propelled implement of husbandry” was excluded from Ontario’s compulsory insurance regime.
What complicates matters is that ATVs are also used as recreational vehicles. When used for this purpose, they are not exempted from the province’s Compulsory Automobile Insurance Act and therefore must be insured when they access public roads and highways.
“The issue, in this case, relates to the changing nature of farming, with which the statutory and regulatory definitions have not kept pace,” Ontario Superior Court Justice Kenneth Pedlar wrote.
“While ATVs are also purchased by many people strictly as recreational vehicles, that is not true of the full-time farming community, based on the evidence in this case.  These vehicles are clearly now an integral part of virtually all full-time farming operations.  They need to be recognized as such and responded to appropriately by our laws.”
Arthur Matheson, 55, is a fifth-generation, full-time farmer who has lived his entire life working on a 500-acre farm in Lanark County. He purchased an ATV in 1997 and registered the vehicle with the Ministry of Transportation, completing an exemption declaration saying the ATV was for “farm use only.”
He told the court that, in the 11 years he owned the ATV, he used it only for farming. He used it to access and repair fencing and for rounding up cattle and sheep. The ATV was equipped with a hitch for towing so that it could be used to pull a small cart. The cart was used to carry supplies such as fencing materials, wire, chainsaws and other tools.
“This challenging legal issue is rooted in a decision…Arthur Matheson made on October 11, 2008 to travel from one part of his farm to another by driving his Honda all-terrain vehicle for approximately 30 seconds or less on a public road in the course of his farming operation, in order to check on his flock of sheep, [which] are pastured on his property,” Pedlar wrote.
“The action is also rooted in another decision of Arthur Matheson, not to insure that Honda all-terrain vehicle, which he had owned since November 1997 under a motor vehicle liability policy, in spite of the advice of his insurance agent.”
Matheson left the property briefly to travel along a public gravel road adjacent to his farm. At or near a gated entrance to one of his fields, he was struck from behind by a truck driven by Gary Wayne Lewis. The collision left Matheson with permanent cognitive and physical deficits which amounted to a catastrophic injury.
Under Ontario law, an insurance company does not have to pay certain auto accident benefits if the driver knew he or she was driving an ‘automobile’ without being insured.
Ontario law exempts certain classes of vehicles from the requirement to be insured on public roads, including a “self-propelled implement of husbandry.” The Highway Traffic Act defines this further as a “self-propelled vehicle manufactured, designed, redesigned, converted or reconstructed for a specific use in farming.”
The court concluded that ATVs do in fact count as being designed for “a specific use in farming.”
SHARE

How do we change perceptions about the insurance industry?