The face of the Canadian insurance industry is changing, with the average insurance professional today most likely being a 42-year old woman who is a people manager in underwriting or claims, according to the Insurance Institute of Canada’s “A Changing Workforce” report. Nonetheless, there is still room for improvement, with women accounting for 36% of senior leadership positions in the industry, even though they make up 62% of the insurance workforce.

Companies across the sector are becoming more aware about the need for initiatives that promote diversity and inclusion in their workforces. At the brokerage level, Navacord stands out with its entrepreneurial model and robust training program that helps to funnel talented professionals into the industry from all different career paths.

Take Hailey Taskey (pictured above), who fell into insurance by accident and is today a senior advisor and partner at Lloyd Sadd, a Navacord broker partner. Taskey started off working in an administrative role at a brokerage when she needed a summer job, and then climbed the ranks until she became an account executive. Eventually, she came to a fork in the road where she had to decide if she would stick with insurance for good or pursue her original intended career path in dentistry.

“I knew that there was opportunity in this industry,” she said. “So, I stayed with a brokerage, but I wanted to be an owner and that was really my driving factor.”

She was drawn to Lloyd Sadd because of the ownership opportunities the company offered, which was “hugely appealing” to Taskey. She reached her goal in December 2018, when she became partner at the brokerage. “That was a defining moment for me and my career, [as was] building my book of business,” she told Insurance Business.

In contrast to Taskey’s path to insurance, Danielle Gorst (pictured below) got her start in the industry after receiving her Bachelor of Commerce with a specialization in risk management. Her parents owned a brokerage, so it had been her intent to take over the business, until she got a job on the insurer side with Chubb. She spent the next 13 years at the company, eventually managing financial lines in the western region, when she decided that it was high-time she try out broking. 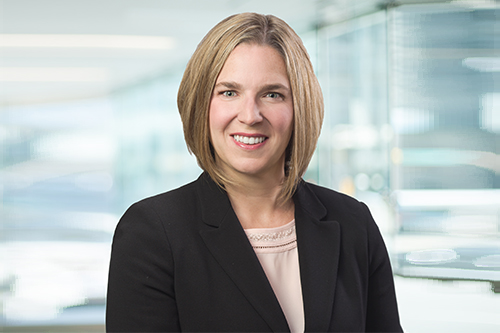 “I had developed relationships with the Navacord leaders over a 20-year period, so I knew these people, I watched them grow their business, and I liked what I saw,” said Gorst. “I also felt that moving to Navacord was going to bring me back to where I started, which was working with smaller brokerages [under the Navacord umbrella] that were family-run and had developed to a size where they became credible within their own markets.”

Relationship-building paid off and Gorst was offered a brand-new role at Navacord as the national practice leader of financial lines – a specialty that leadership wanted to build out.

“I could essentially create my own role and create content for Navacord, and help them grow the financial lines part of their business,” she explained, adding that she was up for the challenge and felt like she needed this type of opportunity in her career.

During both Taskey and Gorst’s time at Navacord, these executives have so far received tons of support from leadership that, alongside their own entrepreneurial drives, has helped them find success.

“Our main goal is keeping that entrepreneurial spirit alive and whoever wants that opportunity and is wanting to be that entrepreneur within a company like Lloyd Sadd Navacord, the opportunity is there,” said Taskey. “They give you all the tools that you could possibly want to be successful – the training, the mentoring, and the people that we’re surrounded with are some of the best in the industry.”

Read more: Behind the scenes of being a broker partner at Navacord

Meanwhile, over the course of the roughly two years that Gorst has spent at Navacord, leadership has helped to elevate her profile at the company, as well as with clients and prospects by supporting her participation in speaking engagements. Gorst has also been given leeway to develop her role at Navacord as she’s seen fit.

“They had an initial vision, but they asked me to essentially tell them what I thought the role should look like,” said Gorst. “They have also been very supportive in content creation, so they’ve allowed me to create my own content with very few hurdles to get it over the finish line.”

On the whole, the support coming from leaders at Navacord “is huge,” added Taskey, “and it’s a contributor to the success of not only women in the industry, but anybody that wants to be in these positions in this industry.”