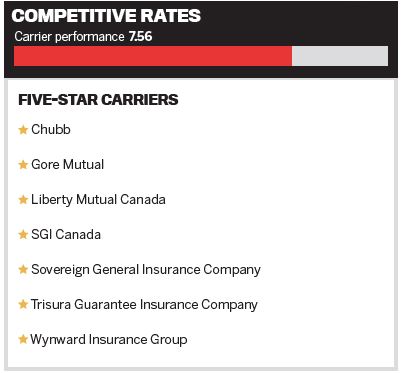 Many brokers acknowledged that the blame for tough pricing conditions doesn’t fall exclusively on carriers; several commented that the market is pulling rates up

There was little enthusiasm among brokers when it came to carriers’ ability to provide competitive rates, despite this being the third most important quality brokers look for in a carrier. Yet carriers improved significantly on their average performance in 2019, moving from a score of 6.99 in 2018 to 7.56 this year. In addition, seven carriers earned five-star ratings for the competitiveness of their rates, which is on par with the eight that achieved the distinction last year.

Many brokers acknowledged that the blame for tough pricing conditions doesn’t fall exclusively on carriers; several commented that the market is pulling rates up. “It is difficult in this hard market – push for auto reforms,” said one broker, while another admitted that their carrier’s rates “are fairly priced for the marketplace.”

The competitiveness of a carrier’s rates also depends on the area of the business. Brokers have witnessed competitive rates for commercial lines but less so in personal lines. Others pushed for improvement in auto insurance rates, including for one-vehicle policies, while another broker advised their carrier to lighten up the rates for claims-free renewals. Another broker opined that their carrier’s rates are “great – if you fit into their box of desirables.”