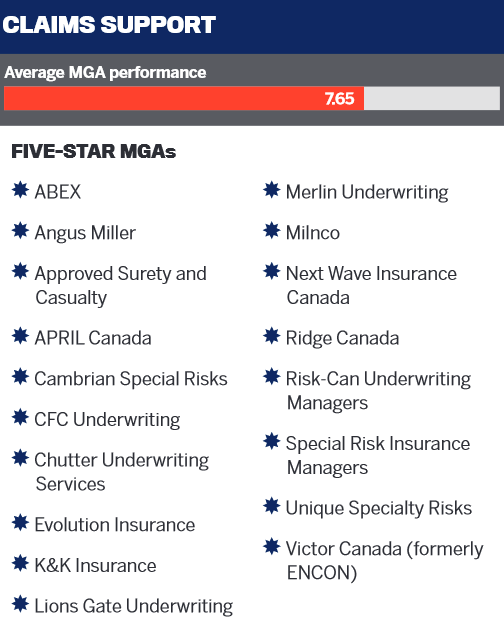 Claims support wasn’t a big issue for brokers this year. Just 22% named it as one of the top factors they consider when choosing an MGA partner – a significant drop from 30% last year. MGAs’ average score in this category also fell for the second year in a row: Overall, MGAs earned a score of 7.65, down from last year’s 7.69 and 2018’s 8.00. However, more MGAs received top marks this year: 18 earned five-star ratings, compared to last year’s 17.

Brokers were most pleased when MGAs were responsive, provided updates on the status of claims and were quick to get things resolved – and they were equally unhappy when those things were absent. “[Claims support] is a concern with MGAs, given relationship bonds can be non-existent, and delayed response and settlement times jeop-ardize our client business and relationships,” said one broker. Another reported that their MGA “needs major improvement – the claims person is terrible and slow to respond and deal with issues.”