by Caitlin Bronson 07 May 2014
SHARE
Despite a tightening regulatory grip on liquor liability, sales of appropriate policies continue to dwindle. More than half of commercial establishments that serve liquor choose to operate without liquor liability insurance, and many do so only because they aren’t aware of coverage gaps under their general liability policy.

That decision is not only illegal in many states, it could cost clients enough to put them out of business.

Owners of “dram shops”—defined as bars, taverns or other similar establishments in which alcohol is a main driver of revenue—must be especially careful. According to a Business Insurance Now report, it costs these establishments an average $150,000 to defend a liquor liability claim in court no matter what the outcome.

Further complicating the matter is differing dram shop laws, and their interpretation by courts, from state to state and even city to city.

“Everything is different according to the ‘house rules’—almost like guns,” said Partners Specialty Group broker Jeff Short, who noted that dram shop laws were too diverse for anyone to make broad conclusions. “For example, Texas is a tough state—they really go after the bar if something happens. Las Vegas, on the other hand, is very easy.”

That relative risk is translated directly into premium, says Howard Sweetwood, a producer with Rampart Brokerage in the New York metropolitan area.

Amidst all this confusion, many hospitality accounts aren’t even aware they have an exposure. Too many mistakenly believe they are covered by their general liability policy, and need an experienced agent well-versed in specific dram shop laws to advise their insurance purchases.

Here’s an infographic to guide producers in their discussion of liquor liability with clients. 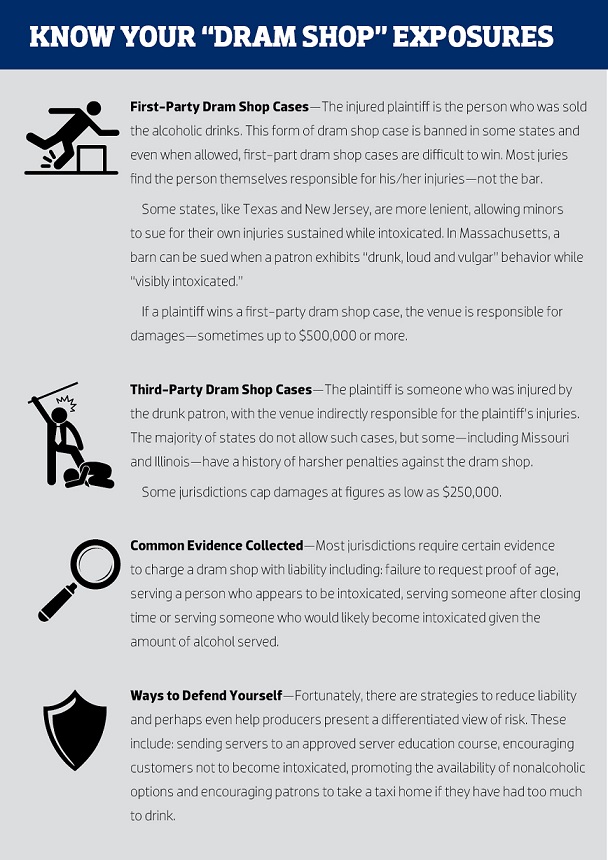 Partners Specialty Group is a nationwide, independent, wholesale broker with a history of providing innovative insurance solutions for the most challenging risks.  PSG takes pride in our thoughtful, intelligent approach to identifying the best specialty insurers for each risk.  This results in a satisfactory result for the retail broker and the insured.  PSG brokers have extensive experience and enduring underwriter relationships which enable us to be nimble and responsive.  In addition to our Hospitality/Leisure expertise, PSG’s areas of specialty include Construction, Real Estate, Manufacturing, Financial Services, Healthcare, Transportation and Environmental.   Further information is available on our website www.psgins.com.