The reputation of the Affordable Care Act is sagging, but a couple of Colorado nonprofits are seeking to improve it with beer kegs, birth control and Ryan Gosling.

The ad campaign—called “Got Insurance?—is the brainchild of Colorado Consumer Health Initiative and Progress Now. Each ad is targeted at a specific group: young adults, women and minorities. Ad designers say they hope their creations will go “viral” and draw more healthy people to the federal and state-run exchanges.

However, the groups’ tactics seem to be drawing more frenzied disapproval than fervor for the ACA.

One ad—labeled “hosurance” by critics—urges women to get health insurance that covers birth control so they can land a “hot guy.” Another boasts, “Keg stands are crazy. Not having health insurance is crazier. Don’t tap into your beer money to cover those medical bills. We got it covered.”

Even actor Ryan Gosling was used to appeal to younger Americans. Drawing on the popularity of the “Hey Girl” meme featuring Gosling, one of the “Got Insurance?” ads reads, “Hey girl, you’re excited about easy access to birth control and I’m excited about getting to know you.” 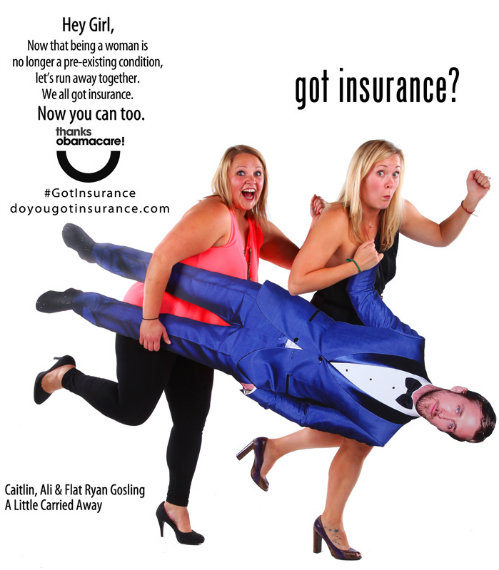 The ads have been condemned by critics from both sides of the political aisle. Conservative talk show host Dana Loesch called them “the ‘You’re a whore’ ad for Obamacare,” while the left-leaning Planned Parenthood Votes Colorado actually thought the ads were a parody created by opponents of healthcare reform.

“Unfortunate that anti-Obamacare folks are slut-shaming women who use birth control,” the group tweeted.
Adam Fox, the director of strategic engagement for the Colorado Consumer Health Initiative, isn’t too bothered by the controversy the ad campaign has generated, however.

“It’s been fun to watch how it all plays out,” Fox told Business Insider. “We’ve seen both positive and negative reactions, but if people are seeing the ads and purchasing health insurance, that’s a good thing.”