by Hanna Schieve 16 Jan 2018
SHARE
The number of natural disasters worldwide has only exceeded 600 five times. All of those were recorded in the last six years. Exceptions, it seems, are no longer exceptions.

In 2017, 710 natural catastrophes resulted in a total of US$135bn in insured losses – the highest ever. With the costliest hurricane season on record in North America and severe flooding in South Asia, the overall macroeconomic impact of natural catastrophes soared to US$330bn – second only to 2011 when Japan was hit by the Tohoku earthquake and Thailand was ravaged by floods, says Munich Re’s 2017 natural catastrophe review.

North America
North America (including the Caribbean and Central America) made up 83% of insured losses globally. The trio of hurricanes Harvey, Irma, and Maria dominated the catastrophe narrative in 2017. Harvey alone racked up a bill of about US$85bn, making it the costliest natural disaster of the year.  “We learned from these events,” says Tony Kuczinski, president and CEO of Munich Re. “First, that mitigation and improved risk management, such as stronger building codes in Florida, can work to reduce losses and promote life safety. Second, there continues to be a substantial insurance gap, even in a highly developed market like the United States where, for example, the vast majority of business owners do not purchase flood insurance.” 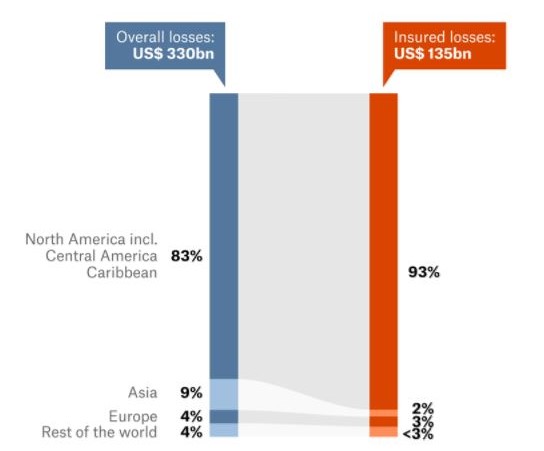 Europe
Disrupted farming patterns in Europe caused overall losses of US$3.6bn in the agricultural sector. Climate change could be responsible for the damage that late frosts bore on crops last spring. “Plants in certain regions are beginning to sprout earlier in spring, while the threat of frost often does not diminish to the same extent, so that the risk actually increases,” says Munich Re. Harvests were reportedly 50% smaller than usual, striking a hard blow to an industry with notoriously low insurance penetration.

Asia
2017’s deadliest event was an extended monsoon season in South Asia that cost 2,700 lives. The humanitarian impact of the disaster was compounded by the fact that only a fraction of the total US$3.5bn in losses was insured, according to Munich Re. However, total losses in the Asia-Pacific region were lower than previous years. “The numbers show how alarmingly sparse insurance cover still is in Asia: only 8% of losses there were insured” says Hermann Pohlchristoph, Munich Re board member. “And yet appropriate insurance solutions do exist, which can significantly help get people and economies back on their feet financially after a natural disaster.”

Looking ahead
The bad news is that the extremity of 2017 might not be an outlier. Rather, record-setting years could become the new normal. “For me, a key point is that some of the catastrophic events, such as the series of three extremely damaging hurricanes, or the very severe flooding in South Asia after extraordinarily heavy monsoon rains, are giving us a foretaste of what is to come,” says Torsten Jeworrk, Munich Re board member. “Because even though individual events cannot be directly traced to climate change, our experts expect such extreme weather to occur more often in future.”


2017 saw a rise in number of natural catastrophes 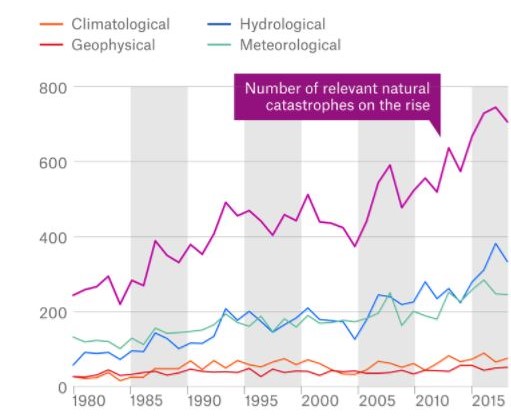