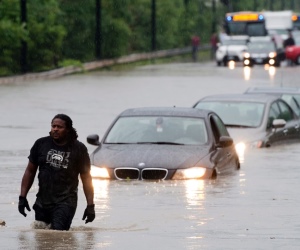 Insurance brokers in Toronto have logged a busy 24-hour period of receiving claims calls, shortly after a severe thunderstorm dumped an entire month’s worth of rain on the city in a span of two hours.

Environment Canada said Toronto's Pearson International Airport recorded 126 mm of rain in the late afternoon and early evening on July 8, breaking an all-time record of 121.4 mm of rain accumulated in 1954 following the remnants of Hurricane Hazel.

“There was a lot of flooding and we’ve been really busy,” said Tim Currie, vice president of Navigators Insurance Brokers. “It started last night and we’ve had a steady report of claims from primarily the downtown, Etobicoke, and Mississauga areas starting at about 8:30 or 9 p.m. last night. They seemed to slow down this morning at around 11 am.

“It’s all water damage calls,” said one broker, saying the mix was about 50-50 sewer backup and overland flooding losses. “The hardest-hit areas are more to the west end of the city.”

Brokers told Insurance Business the extent of the flood damage may have exceeded the city’s record flood losses of 2005, which caused more than $600 million worth of damage.

“This is the most significant I’ve seen in terms of infrastructure damage,” said Currie. “It hit the downtown area harder than the 2005 one, which seemed to be more isolated in the northern part of the city.”

The paralysis in the transportation system caused a lot of personal lines claims, brokers reported.
“People were stuck trying to get home and taking some unnecessary risks in hindsight,” said Currie. “Vehicles were stalling in two or three feet of water. People just didn’t know that if you get your tailpipe underneath the water, the vehicle is probably going to shut down.”

Personal lines appeared to be more affected than commercial lines, Kyle Nichols of Jones Brown said. He added that brokerages were still “peeling back the actual damage,” and he did expect claims covered under commercial auto and property policies.

Brokers did not anticipate a lot of claims arising from the power outage. They said it didn’t last long enough to be covered by insurance, which often comes into play with power outages lasting longer than 48 or 72 hours.

On the commercial side, the biggest role of the broker at this early stage was to make sure that clients are safe, Nichols said.

“The impact [of the flood losses] I think is not going to be so much on insurance, but on how the commercial clients make sure their employees and colleagues are safe,” he said. “Companies must make sure employees are not called back to work too early if the building has been affected. Give them the opportunity to work from home if required.”