NDBI: the missing piece of your business interruption insurance?

“Non-physical damage business interruption (NDBI)…is the next stage in the evolution of covers.”

The crux of the matter, according to Swiss Re, is that traditional business interruption insurance is no longer enough, and companies increasingly need to add to it with evolving NDBI cover.

In the past, it’s been difficult for risk managers to protect against intangible asset exposures, but that’s starting to change. "New types of solutions are providing protection against a wider range of perils, and extending insurance cover from tangible to intangible assets," says Kurt Karl, Swiss Re's chief economist.

Non-damage business interruption: The next generation of innovative insurance solutions 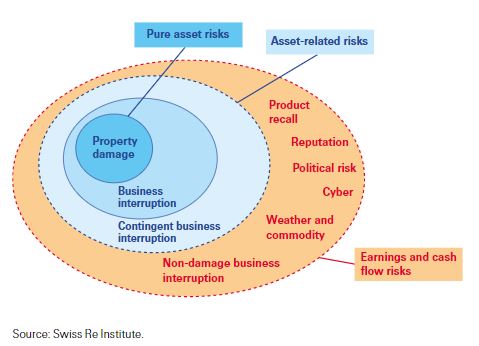 NDBI policies are designed to protect earnings even when there’s no physical damage. For example, natural catastrophes have caused major losses to aviation companies in recent years without physically damaging planes or airports. Disruptive incidents cause airport and airspace closures, resulting in lost revenue, heightened operational costs, and reputational damage for airlines as flights are cancelled and customers are left stranded. Swiss Re offers NDBI cover to protect aviation companies from the resulting non-physical damage. Other types of events that could trigger NDBI include electricity blackouts, strikes, or cyber attacks. With an NDBI policy in place, says Swiss Re, companies are covered for everything from profit losses to extra expenses incurred ensuring business continuity to contractual penalties.

For “asset light” companies like Airbnb (which doesn’t own rental units) and Uber (which doesn’t own cars), physical damage is much less of a risk priority than risks related to income streams and cash flows. “The share price of these companies is driven by their earnings power,” says Christian Wertli, head of innovative risk solutions at Swiss Re. “Anything that impacts cash flows and earnings (in other words, NDBI risks) has a big impact on the share price and market valuation.”

There is no one-size-fits-all solution. NDBI covers can either be standalone or added on to an existing BI or property policy. “NDBI covers are custom made,” says Wertli. “The client needs to have a thorough understanding of key risks impacting cash flows – which exposures can impact revenues. Once the risks have been identified, clients need to decide if these risks are insurable with traditional insurance and what the potential impact or magnitude is.”

But are the risks that NDBI purports to cover really not covered by your existing BI policy?

The answer is, resoundingly, yes.

Take the pharmaceutical industry, for example.

The NDBI solution is a game-changer for pharmaceutical companies, who face devastating profit losses anytime a supplier or owner’s site faces a regulatory shutdown and production is halted. Munich Re’s NDBI product, specially designed for bio/pharmaceutical manufacturers, provides cover for those shutdowns.

“The NDBI product provides coverage where regular property insurance does not, because the trigger for coverage is either a regulatory shutdown by the US Food and Drug Administration (FDA) or a voluntary shut down by the owner of a site,” says Nathaniel (Ty) Howe, commercial risk and insurance advisor, SVP at Marsh USA. “In contrast, the property insurance policy requires a physical damage event in order to trigger coverage.”

In an industry highly vulnerable to regulatory risk, business interruption isn’t always caused by a physical damage event. “The regulatory event that could lead to a shutdown might include the failure to maintain accurate records about the production processes, and [maintaining accurate records] is a requirement for the approval of a site to produce drugs.” says Howe. “If the site doesn’t have its paperwork in order, that can cause a shutdown of the facility and a business interruption event – and there’s no physical damage in that equation at all.” Unless the company has NDBI coverage, they’re out of luck.