The insurance industry is always looking for innovative ways to attract, retain, and support female employees in their career development. Every company has a different strategy, but one insurer to really make waves in the women in the insurance arena is Zurich North America, thanks in part to one unique employee resource group (ERG)– the Zurich Women’s Innovation Network (WIN).

WIN was founded in 2012 by Zurich employees. It was the insurer’s first ERG in North America, and it kicked off with 250 members. Since then, WIN has grown to 1,700 members across 22 chapters in the United States and Canada, as well as thriving in many of Zurich’s international locations. Its core strategy is aligned with Zurich’s workforce sustainability commitments, with the specific focus of building meaningful connections, developing leadership skills and inspiring confidence.

Innovation lies, quite literally, at the core of WIN. The ERG is not “just” a social connective group for female employees – although social connection, networking and allyship are all key value propositions for WIN members. Rather, WIN and other ERGs at Zurich are increasingly becoming business resource groups (BRGs), with WIN contributing to an innovation mindset that helps drive the business forward, while showing the value that women can bring

WIN has long championed diversity and inclusion at Zurich North America, where women make up half the workforce and the CEO is Kathleen Savio. Zurich policies such as flexwork— over 60% of employees had flexwork arrangements prior to the COVID-19 outbreak — and 12 weeks of 100% paid family leave for parents welcoming a child to their family via birth, adoption or fostering, are intended to empower all employees to reach their full potential.

Read next :Zurich says it can "sustainably pay" high level of dividend

WIN programming helps keep the business aware of emerging challenges for employees, while helping women feel heard and supported. In a recent WIN virtual panel discussion, three female employees, including the leader of another Zurich ERG, the Zurich African Ancestry Alliance, openly shared challenges they were experiencing during the pandemic, including caring for older parents, planning for the possibility of remote schooling for children in the fall, and coping with racial tension and national unrest.

“People are seeking connection more than ever,” said Teresa Logue (pictured, main image), head of the Women’s Innovation Network (WIN) and head of manager excellence at Zurich North America.That’s one reason Logue has been working with Zurich’s talent acquisition team to highlight WIN as part of the employee value proposition during the recruitment and selection processes.

Logue explained: “We want to make this part of our employee promise, and we want to introduce it early when people are researching potential career opportunities. We want to show that we have these wonderful ERGs, like WIN, that employees can join, which will help them learn about the company and our culture, network and simply be part of something bigger. And we’re trying to be really purposeful around how we do that across the lifecycle of a person’s employment with Zurich.” 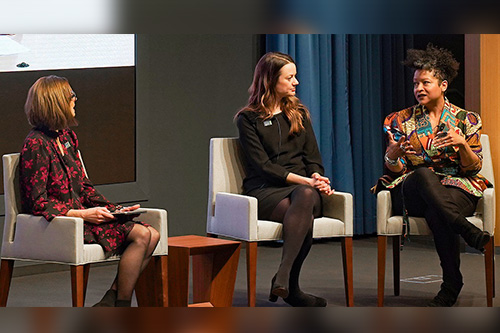 WIN plays a key role in providing career development opportunities for women within Zurich. This year, the group had planned to hold a Women’s Leadership Summit, where 75 women from across Zurich were invited to participate in three days of purposeful programming designed to address business and personal development. Unfortunately, the conference – which was to be held at Zurich North America’s headquarters in Schaumburg, IL – had to be postponed due to the COVID-19 pandemic. WIN plans to reformat it as a virtual event before the end of the year.

Another unique offering WIN has put in place are the WIN Leagues, which are small breakout groups intended to help build connections and support conversations around personal development. Each league has eight members who connect via video chat once a week. The goal of the leagues, as explained by Logue, is for members to “collaborate without geographical locations, connect with different perspectives, practice conscious networking, develop meaning relationships, and focus conversations on impactful topics.”

“Each league is led by a female senior leader. They last for eight weeks, which allows each of the eight members to choose one topic of discussion,” Logue told Insurance Business. “The topic can be anything that’s important to that member. Some members have referenced TED Talks, others have shared Harvard Business Review research on a particular topic, and at the moment, there are lots of discussions around how to balance remote working with family life and what ‘back to school’ is going to look like. These leagues are wonderful, intimate, and psychologically safe places for members to talk and get real insight.”

A survey about the leagues at the end of season one produced overwhelmingly positive feedback, Logue said.“We took a net promoter score approach, and we scored 86, which was extraordinarily high for our WIN events. Some of the notable comments were: ‘I loved connecting with women in other areas whom I would likely never have interacted with,’ and ‘The sessions were honest, reflective, and empowering.’ One of my favourite pieces of feedback was: ‘Our 30-minute weekly meeting is the one meeting of my work week that I look forward to the most.’”

After a successful first year of leagues in 2019, WIN recently launched season two, with 207 league members across 26 leagues in the US and Canada. Furthermore, Logue — who also heads up the Manager Excellence program at Zurich — has learned from the success of the WIN leagues and is considering a similar peer-to-peer model in how Zurich is developing managers. 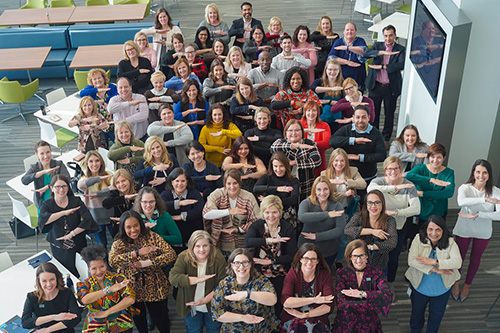 WIN’s business value is recognized throughout Zurich, and not just among its female employees. In fact, while some organizations struggle to elicit male involvement for women in insurance initiatives, Zurich’s WIN has secured the executive sponsorship of chief claims officer Paul Lavelle.

“Paul is our fiercest ally, and he's committed to our mission,” Logue said. “The fact that we have extraordinarily strong executive male support at the top of the house is fantastic. We also have about 130 men who are official members of WIN, and many other men join our events and serve as important allies to our members. There is continued focus in getting more men involved, but the fact that Paul is our sponsor, and a very visible one at that, has really been serving us well.”

“Success begets success,” Logue added. “It’s the quality of the WIN programming, and the candour of the conversations, that is attracting participation and engagement. I think everyone, regardless of gender, can identify with some of the challenges that women bring forth in the WIN panel discussions. It’s energising and it’s time well spent because they not only talk about challenges, but also how they’re addressing them. It’s really an investment in your own development when you listen and engage with WIN discussions.”