Ahead of the pack

As AXA XL continues to merge divisions across the globe, insurance veteran Kelly Lyles is leading her teams to success

IN MORE THAN three decades in the insurance industry, Kelly Lyles has seen her fair share of market-moving activity. Currently the London-based chief executive of client and country management for AXA XL, Lyles was there for XL Group’s acquisition of Catlin Group back in 2015, as well as for French insurance giant AXA’s blockbuster acquisition of XL last year.

Lyles’ responsibility of overseeing client relationships and country operations in Asia, Europe and the Americas is no easy feat; doing so as part of the leadership team charged with creating the number-one P&C commercial lines platform in the world is another challenge altogether. But her years of insurance expertise have prepared Lyles for this monumental task.

“I started at AIG in 1985 when I joined their graduate program right out of university,” she says. “I had a really good training basis at AIG. They put you through all the different functions, [and] you spend a little time in each. I started as an underwriter, and then I moved to London in 1990, again as an underwriter, to write UK D&O.”

At the time, AIG didn’t have many underwriters working on the D&O line in that market, which made the task of crafting policies that much more interesting.

“It was really exciting to move here at a time when UK D&O was just taking off,” Lyles says, recalling how the team was creating a need for the product while also developing a theory of liability. “It was fun to be at the front end of a nascent market and on the cutting edge of creating something new. I often look at that as one of the most creative and rewarding times in my career.” 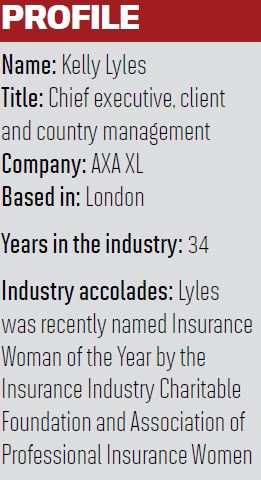 Even though Lyles admits she knew little about insurance before she entered the industry, she says it ended up being the perfect match for her skill set.

“I wanted to do something that was a mixture of analytical skills and your own sales skills and personality,” she says, although she quickly learned about the value of insurance.

“It never occurred to me that businesses couldn’t exist without insurance to take away the volatility.”

From D&O, Lyles made her way to running financial lines and then commercial lines. After a four-year stint in Paris with AIG, she joined XL, drawn by the calibre of the company’s leaders.

“At the time, I just fell in love with leadership at XL, which was growing quite a bit, and I thought that [CEO] Mike McGavick and [president and COO] Greg Hendrick packed a punch in terms of their leadership,” Lyles says. “I thought that was the type of innovative, nimble company that I wanted to [be a part of], so I joined them in September of 2014.”

“One of the neat things we did is we decided to invest in a client management function. We didn’t have one ‘AXA XL way’ of handling clients, so that’s one of the things we’re building for next year”

Today, in managing AXA XL’s insurance presence around the world, Lyles leads teams in units such as strategic client and broker management, global programs, captives, and portfolio solutions. She is also an award winner, recently walking away with the Insurance Industry Charitable Foundation and Association of Professional Insurance Women’s 2019 Insurance Woman of the Year Award.

Merging of the minds

The process to combine AXA Corporate Solutions, AXA Art, AXA Matrix and XL Catlin is still ongoing. Much like AXA XL’s focus on innovative solutions, this move has required an out-of-the-box approach to problem-solving.

“We’re still very much in integration,” Lyles explains. Since October 2018, about a month after AXA’s acquisition of XL was finalised, the company’s executives have been consulting with AXA XL’s works council, which represents the interest of workers and is affiliated with a trade union. The executive team has had to outline to the council what the company’s target operating model will look like, where the overlaps were and whether there would be redundancies. That consultation process only wrapped up earlier this summer, giving AXA XL the go-ahead to kick off its global integration.

“So far, we’ve been really successful, and that’s without really being able to do very much ... That bodes well for the future when we’re able to roll up our sleeves and start working with the legal entities”

“We’re just coming out of it now, which means we can start to name [leaders] in countries, but we had to navigate the challenges of integrating different teams and systems while operating as separate companies,” Lyles says. “At times that’s been tough, so I think the first thing is, bravo to all of our colleagues who navigated a challenging time. Now we can

As part of this merger of teams, particularly for those that Lyles oversees, all country leaders will be putting operations in their countries together and will now be charged with determining a single process for how to deal with captives and global programs and introduce new functions.

“One of the neat things we did is we decided to invest in a client management function,” Lyles says. “We didn’t have one ‘AXA XL way’ of handling clients, so that’s one of the things we’re building for next year.”

Ultimately, AXA’s purchase of XL was predicated on revenue synergies – the company recognised the fact that as AXA XL, it can do even more for its global clients.

“There’s the ability now for XL Catlin to offer an AXA motor product to clients, or to provide them climate or parametric products, or to offer clients employee benefits – all of the things that AXA has that XL Catlin didn’t have, as well as some of the specialty products that XL Catlin has that AXA didn’t have,” Lyles explains. “We’re very involved in that cross-sell initiative and how we just write more busi-ness. So far, we’ve been really successful, and that’s without really being able to do very much because of the consultation period. That bodes well for the future for when we’re able to roll up our sleeves and start working with the legal entities.”