Craig Langstone has stepped down from his role as chairman of the New Zealand Insurance Law Association (NZILA) after seven years.

Langstone, who marked his departure in typical flamboyant style wearing a bold three-piece suit covered in footballs, announced his decision on 11 September at the NZILA AGM, held during the annual conference which was in Wellington this year. 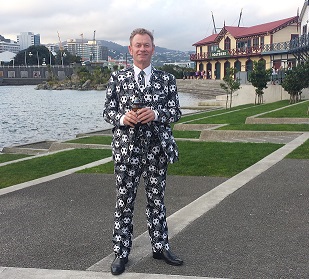 The soccer fanatic, who is a partner at litigation specialists, Jones Fee, said he was pleased to leave the Association in a good state.

“I leave the Association in good hands, with an excellent level of camaraderie amongst its members and in embarrassingly good financial health,” he said, referring to the balance of members funds being at $210,000 as at 31 March 2014.

He also urged members to make use of the newly-upgraded NZILA website.

NZILA secretary Frank Rose paid tribute to Langstone’s efforts saying: “He’s been energetic, entertaining and he will be missed.”

He also made special reference to the ‘stirling effort’ made by retiring vice president Roger Scholes, who was stepping down after a remarkable 16 years in the role.

The new positions were elected in with Jonathan Scragg, a partner with Duncan Cotterill in Wellington, as the new president and Crombie Lockwood’s head of claims and earthquake response, Myles Noble, as the new vice president.

Frank Rose remains as secretary and Leon Briggs as treasurer.

Suggestions were made at the meeting to use the surplus of funds to provide lecture tours around the country with invited speakers such as Professor Robert Merkin.
SHARE
Fetching comments...