by Hanna Schieve 03 Feb 2018
SHARE
The good news: Terrorist attacks and related deaths are down. The bad news: Terrorism risk is harder to manage than ever.

Events like last year’s terrorist attack at an Arianna Grande concert in Manchester continue to place terrorism high on the list of risk exposures facing businesses. Sixty percent of all US companies have terrorism insurance – a significant share considering the sky-high cost of premiums (up to US$49m), according to the Insurance Information Institute.

In the past year, the number of terrorist incidents dropped from just over 10,000 to about 7,000, according to data compiled by Control Risks in a new report, with fatalities dropping by similar margins. But for risk managers, the devil is in the detail.

“Lone actors” using low-tech tactics are becoming the new faces of terrorism, and risk managers will be tasked with finding new ways to address the increasingly elusive threat. “Risk-management efforts should focus on the fundamentals of training the workforce to identify and report concerning behaviours, to maximize opportunities for detection and intervention efforts in the early stages of radicalisation prior to a commitment to violence,” said Shawn VanSlyke, director of Control Risks. 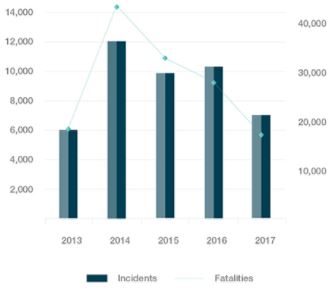 Elusive attackers
The Islamic State’s (IS) loss of controlled territory in Iraq and Syria in 2017 was a significant factor in the overall decline in terrorist attacks. Yet despite its diminishing power, the group was still effective in inspiring many high-profile attacks in Western countries (notably the UK, US, Australia, Finland, Spain, and Sweden), a trend likely to continue into 2018 as IS seeks vengeance for its territorial losses by inciting violence abroad.

In 2018, Islamist extremists, ethno-nationalist insurgents, and leftist guerrillas will be the primary instigators of terrorism, Control Risks predicted. However, “lone wolves” who are inspired by extremist ideology, often through the internet, will make up a growing body of attackers. In Europe and North America, overt anti-Semitic, anti-immigrant, and ethno-nationalistic sentiments will characterise right-wing extremists.

The advent of social media and online propaganda has made the threat environment more difficult to manage. Attackers no longer need formal ties to organisations to carry out terrorist activities, and “lone wolves” are harder to detect by law enforcement.

Islamist extremists, ethno-nationalist insurgents, and leftist guerrillas will remain the main sources of terrorist violence in most countries in 2018, but the fringes of these ideological movements are embracing extremist violence from afar, outside of formal organisations.

In the US, for example, individuals associated with right-wing extremism who committed lethal acts alone had a history of concerning, observable behaviour. “Ideological rants and tirades often intruded on their conversations, and others were not only aware of their support for an extremist cause, but had concerns for their potential to harm themselves or others,” VanSlyke said. “While it's true that the so called ‘self-radicalised’ extremist poses challenges for detection, reputable case-based research has consistently revealed the presence of observable behaviours during both the radicalisation and attack-planning phases.”

Broader targets
Major cities and urban centres have traditionally been the primary targets of terrorist attacks, but as Islamist extremism decentralises and “amateur” or “lone wolf” attackers in Western countries grow in number, the risk of terrorism will spread to smaller, less densely populated areas, too.

Simpler tactics
Nearly half of all terrorist incidents in Western countries last year used low-tech, low-cost tactics – like the stabbing and vehicle-ramming attacks infamously carried out in London. Less sophisticated tactics like these are easier to execute, so they are expected to occur more frequently in the coming year. “Vehicle-ramming as a tactic is likely to be generally attractive to violent extremists of any stripe for the same reasons it appeals to Islamist extremists: minimal training, experience, and planning required,” Control Risks said. 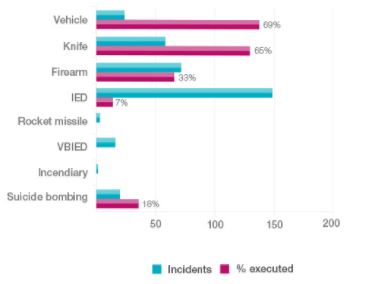 Corporate response
Risk managers will need to work across departments to develop corporate preparedness plans to manage increasingly unpredictable terrorist threats. “The importance of robust, multi-disciplinary ‘insider threat’ and workplace violence prevention programs, equipped with a knowledge of the behavioural indicators associated with the emerging threats, cannot be understated,” VanSlyke said. “Identification of problematic signs indicative of increasing levels of anger and hostility, isolation, and formation of grievances can be critical to recognizing an advancing threat.”
SHARE