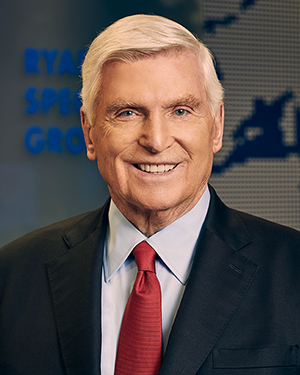 A widely respected entrepreneur and global insurance leader, Patrick G. Ryan formed Ryan Specialty Group in 2010. Ryan Specialty is a rapidly growing service provider of specialty products and solutions for insurance brokers, agents and carriers. Ryan Specialty provides distribution, underwriting, product development, administration and risk management services by acting as a wholesale broker and a managing underwriter. Prior to launching Ryan Specialty, Mr. Ryan founded Aon Corporation and served as its Chairman and CEO for 41 years. At Mr. Ryan’s retirement, Aon had more than 500 offices in 120 countries, generating revenues then in excess of $7 billion.

Mr. Ryan has been recognized throughout his career for his commitment to his values and his impact on the insurance industry. Some awards include the esteemed Horatio Alger Award, received in 1987, which honors those who are dedicated to the principles of integrity, hard work, perseverance and compassion for others. In 2008, Mr. Ryan was inducted into the American Academy of Arts and Sciences, one of the nation’s oldest and most prestigious honorary societies and independent research centers, founded in 1780. Also in 2008, he was elected to the International Insurance Society Hall of Fame. Other career tributes include Insurance Leader of the Year from St. John’s University, the Insurance Federation of New York's Free Enterprise Award, and the inaugural inductee into the Business Insurance Hall of Fame. In July 2019, Mr. Ryan was inducted into the Automotive Hall of Fame for his contribution to the Finance and Insurance Specialists sector of the automotive industry.