Scanty retirement savings and the after effects of the Great Recession have kept about a third of the country’s over-65s in the workforce, but some sectors are aging faster than others. According to data from the Census Bureau’s LEHD program, nearly a quarter of employees in the utilities, manufacturing, public administration and educational services industries are 55 or older.

Together, 23% of workers in these four industries are over 55 and therefore nearing traditional retirement age. Educational services boast the highest percentage of over-55s (26%), but adding the 45 to 54 age group brings utilities to the top of the pile (57%).

The aging of America’s workforce is not likely to stop soon, either. The Harvard Business Review estimates that by 2050, more than one-fifth of the US population will be 65 or older, many still going into the office each day. 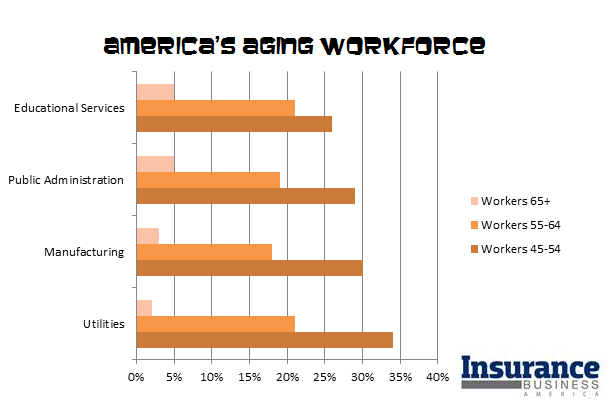 "There are several implications," Weisbart told Insurance Business, singling out auto, health and workers compensation as the most obvious.

These implications are likely to hit the utilities and manufacturing industries hardest, where workers are already at a greater risk for accident and illness.

"The data is pretty clear that people who are over 65 tend to have more injuries and illnesses, and when they do get sick, they tend to stay out longer than younger people," Weisbart said. "This would cause workers' comp claims to rise."

The same is true of sectors—such as utilities or public administration—that require employees to drive a company-owned vehicle.

"At least some of these older people will continue driving to work at times when traffic is at its peak…and to the degree that their age is associated with reduced reaction time or other limitations, that would cause them to have more accidents," Weisbart said.

This cocktail of insurance implications could complicate work for producers assisting businesses in these sectors. However, Weisbart pointed out that producers, now an average age of 48 may have one advantage.

"Some of the agents themselves will be advancing in age, so it’s entirely possible that this will give them an advantage if they are dealing with clients a similar age," he said. "This is compared with someone 30 years younger, whose client might say [the agent] doesn’t understand my values my priorities, or my experience."

"I would argue that from an agent’s point of view…their advanced age and the advanced age of their customers could be a plus."

You may also enjoy:
"65-year-old CEOS in need of coverage"
"Aging producers could lead to agency employment crisis"