Professional indemnity insurance is gaining increasing prominence in the public eye. Declan Rye of London Australia Underwriting talks through some of the common issues clients might face

Traditionally, professional indemnity insurance has been viewed as the domain of core professionals like accountants, engineers, architects and lawyers. However, it’s available for a far broader umbrella of roles – PI cover should really be considered by anyone who provides a service other people rely on.

“The definition of ‘professional service’ can be broad, often extending well beyond popular perception,” says Declan Rye, director of London Australia Underwriting. “Ensuring a duty of care, providing clients with the relevant instructions to use your product correctly – these are just some of the areas where businesses may find themselves encountering issues.”

Given that Australia is a highly litigious society, businesses need to be more aware than ever of the necessity of PI insurance. While the financial protection offered is clearly the key benefit, it’s also important to remember that PI insurance can also protect a business’s reputation. PI insurance will often provide the legal and reputational defence needed, particularly when a business feels it has done everything right and the claim is contrived.

“Without your reputation, your business will disappear soon after,” Rye says.

The changing face of PI

Having worked in the industry for more than 25 years, Rye has seen a significant shift in the way the PI market functions.

“Working in London in the late ’80s and ’90s, professional indemnity insurance was a very new product, seen as a very specialist area with a handful of lead markets,” he says. “Today, a broker can access all the markets they need to with a click of a button or a short email.”

This reduction in complexity has allowed for more simplified policies and greater ease of transaction for many businesses. On paper, this has made it easier to pursue PI insurance, but Rye expresses ambivalence about this phenomenon. PI is inherently a complex area of insurance, and inadequate policies can cause considerable headaches.

“Simplified policies are great for some businesses that have relatively simple needs,” he says. “But they can also be dangerous for some of the more technical industries. Ultimately, most businesses can benefit from the services of a good broker who will discuss the full range of coverage they require, not just simply negotiate a price.”

Greater simplicity has also led to a boom in businesses seeking opportunities in this potentially lucrative market. PI insurance has enjoyed rapid growth in Australia in recent years, and there’s been an ongoing increase in the number of Lloyd’s coverholders in the local market. But this has yielded numerous consequences: Competition has been fierce, and subsequently, rates have been continually dropping to levels that are now unsustainable.

“Simplified policies are great for some businesses that have relatively simple needs. But they can also be dangerous for some of the more technical industries. Ultimately, most businesses can benefit from the services of a good broker” - Declan Rye, London Australia Underwriting

Brokers need to ensure they communicate the changing market conditions to their clients so they are fully informed and educated about the cyclical effect of the market. Many brokers who are more recent entrants to the field have never experienced a hard market and are struggling to communicate rate rises to their clients.

Rye says many insurers have overlooked the fact that PI is long-tail business; it can take anywhere from one to five years – even longer in some cases – for a claim to crystallise and be closed with a final settlement amount. Withdrawals from the Australian market are already starting to occur, likely due to a combination of falling rates and incoming claims.

“For an underwriter with little experience in long-tail business, this time delay can create confusion,” Rye says. “Eventually the claims catch up, and I believe this is what we are now witnessing in the Australian PI market.” 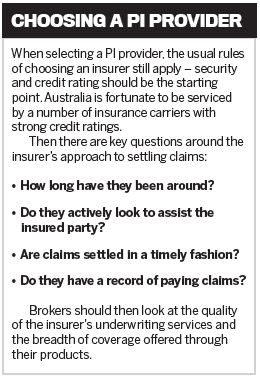 Given the current state of low rates versus incoming claims, Rye anticipates more withdrawals from the Australian market in the next six to 12 months. Looking further ahead, there will also likely be gradual rate increases over the next 12 to 18 months as the market corrects to more sustainable levels. Additionally, some occupations will be hit harder than others due to more adverse claims events.

“We expect to see an increase in real estate related matters, including valuers, in the next 12 months or so,” Rye says. “Banks are now beginning to cut back in terms of lending, and there are greater controls on foreign investment, which will have a knock-on-effect.” Wider economic uncertainty also frequently impacts on construction-related claims; this will likely be heightened by greater scrutiny on the industry, thanks to high-profile issues such as the faulty cladding in the Lacrosse and Grenfell towers in Melbourne and London.

Accountant’s PI is also of note – for some time, the industry has experienced increasing claims activity, in terms of both the numbers of claims and the average size of each claim. Common issues range from penalties imposed by the ATO for late lodgement of tax returns or BAS through to incorrect advice relating to non-concessional superannuation contributions.

Nonetheless, Rye remains optimistic about the future of professional indemnity in Australia. “Broadly speaking, we are just entering another phase of the cycle,” he says. “No doubt it will correct itself in time.”

Fortunately, there is still plenty of choice for brokers when choosing a professional indemnity insurer, but of course, prevention is better than a cure. There are numerous ways businesses can protect themselves from potential PI claims.

First and foremost, it’s essential to have accurate retainer agreements in place with any new or existing clients. Any such retainer agreement should be recorded in writing and accurately describe the services the insured has been retained to provide, including who will perform the work, applicable rates and timeframes (if relevant). Any such agreement should also be regularly reviewed and updated if required. Additionally, the use of robust disclaimers, while not a watertight safeguard, can at least establish expectations for both parties.

“Businesses really need to stick to what they’re good at. We often see claims arising from situations where a company has diverted away from their established path and taken on a role that involves unfamiliar territory” - Declan Rye, London Australia Underwriting

Rye also stresses the importance of keeping client fi les up to date – even details that might appear to be minor.

“Often a claim will refer to verbal advice, so evidence of such verbal advice is essential when proving negligence,” he says. “This can be in the form of a follow-up note to the client detailing the verbal advice that was provided.”

Internal systems must be secure and internal processes fully functional to ensure that the appropriate checks and balances are in place for quality of work. Additionally, Rye has a simple but crucial tip for business: Don’t overstep the bounds of your expertise.

“Businesses really need to stick to what they’re good at,” he says. “We often see claims arising from situations where a company has diverted away from their established path and taken on a role that involves unfamiliar territory.”