“My brother was originally going to do the rally with me,” Burke-Douglas told Insurance Business. “However, he and his wife are expecting their second child, so he’s had to pull out.”

Standing in – and transforming what was supposed to be a sibling duo into a 100% ProRisk team – is Varkoly, who Burke-Douglas described as not only a colleague but also a good friend. The product manager said he was “stoked” to be joined by his ProRisk mate for the June 5-12 drive from Alice Springs to the Gold Coast.

The event is for the benefit of Cancer Council, and will see pairs drive a car worth less than $1,000. Below, pictured with Burke-Douglas, is the $950 shitbox that he and Varkoly will use. 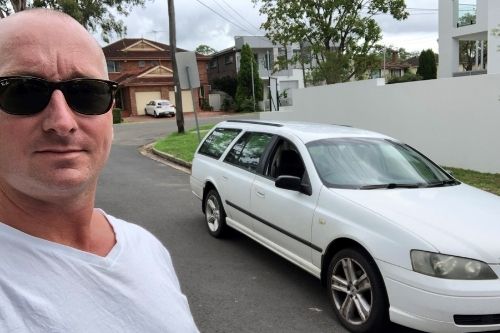 Meanwhile, citing his wife’s backing, Varkoly said: “Kerri-Anne (of Howden) and my family are very supportive of this seven-day journey that I will embark on in nothing more Aussie than a 2004 shitbox Ford station wagon taxi running on five cylinders. Time to show my PlayStation WRC Championship Rally skills!

“Rally driving isn’t my speciality but I do drive fast cars, and paddock bashing is a blast. Let’s see if we can paddock bash for seven days and 3,000 kilometres, and let’s see how far we can push the donation kitty for this great cause.”

As for the white vehicle, which was also sponsored by the underwriting agency, it won’t be as spotless soon. “We’ll be plastering our shitbox in ProRisk stickers,” shared Burke-Douglas.

“And while our car won’t be as fancy as the Steadfast racing team’s car, it’s all for a good cause,” he said. “All funds raised go towards the Cancer Council. We’ve now hit our target of raising $5,000. We’ve been blown away by the support that we’ve received from our friends, family, and the insurance community.”

Donations are made via autumn2021.shitboxrally.com.au/this-is-serious-mum.