One way or another, it was inevitable that David Bearman (pictured above), group CEO of the newly christened Aventum Group, would wind up designing something significant. That this has ended up being a business rather than a building, may be a surprise to Bearman who left college with a view to becoming an architect, but it’s a welcome one.

Today marks the unveiling of Aventum Group, the product of the global restructure and rebrand of Direct Insurance Group, as the group positions itself for the next stage in its growth journey. Its combined operations currently control over $600 million GWP with a forecasted, adjusted EBITDA of $31 million - but this is just the kick-off point for Bearman’s vision of Aventum becoming one of the best and the biggest global (re)insurance specialty wholesale businesses in the world.

Read more: What a rebrand means for an insurance business

“It’s been fun, though it’s not been easy,” he said. “It’s been 25 years of building the business from effectively nothing. We started with the Yellow Pages at a boardroom table, as Direct Insurance Agency in 1996, bringing in the butcher, the baker and the candlestick maker, if we could place it… We’re proud of what we’ve achieved. We’ve got fantastic colleagues in the business and a brilliant culture. And I think after 25 years of work, it’s time to take the sheet off and unveil that to the world.”

“From a day-to-day perspective, our clients are still going to be dealing with the same great bunch of people, the same culture and the same ‘can-do’ attitude,” he said. “But by bringing the business together under one brand, we’re creating a real presence in the market that can leverage our existing system efficiencies and innovation, and enhance the experience of all our customers.”

Quarter of a century of growth has allowed the group to sprawl out into a variety of niche MGA businesses, he said, and the idea to bring them all together under the ‘Aventum family’ made sense as it allows the advancements each business had made individually to come together. Whether it was with regards to tech or innovation or talent, the rich vein of opportunity within each business needed to be tapped into, for the creation of increased brand equity as well as cross-selling capabilities.

“As the business got some considerable scale, we knew that to go to the next level – of which the vision of a billion-dollar MGA business and a billion-dollar broking business is only a milestone – we needed to create better efficiencies, more leverage and more weight in the market,” he explained. “There’s probably a lot of people who didn’t realise until [now] that Novus is connected to Rokstone which is connected to Aura [and so on]. The fact is, we’ve already arrived, we just did so under cover of darkness.”

There’s always a method in the madness behind how the Aventum team chooses names, Bearman said, and this latest was no exception. The team brainstormed many ideas, looking to emphasise the culture of the business and when Aventum was chosen, the Latin root of which means to do things with sincerity, there was a strong consensus that the name hit the right note.

Selecting the name is the easy part, of course, and the Aventum team has no shortage of ambitious strategic growth plans that they are looking forward to kicking up a gear. With 25 years of acquiring talent and market innovation to build on, Bearman said, the focus is on maintaining that upwards trajectory. This will include robust M&A plans, for which the group has a multi-million-pound “war chest” waiting for the right opportunities, as well as continuing its commitment to being “fiercely independent”, culture-driven and people-focused. Looking to its M&A strategy, where an existing pipeline of deals is already in progress, he noted that Aventum has no intention of becoming another consolidator and is not looking for scale, simply for scale’s sake.

“We are looking to target carefully and continue to build out the niche platform and environment that we operate within. We have a number of targets that we’re in discussion with that tick that specialty box for us,” he said. “This is about the long-term horizon for us, we’re an owner-managed business so it’s about continuing what we’ve done in the last 25 years, but also accelerating it now that we’ve got that momentum.”

Culture is an integral part of what has allowed Aventum to survive and thrive since its early days, he said, and while many businesses talk a good culture game, the group goes one step further by enforcing a democratic environment that welcomes the voice and the opinions of all. Having that familial culture means everybody looks after each other because there’s a shared goal and everyone is heading in the same direction. 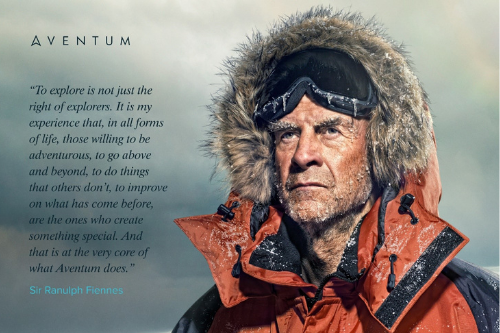 And who better to become the partner brand ambassador of a group looking to undertake an “epic journey” than the celebrated explorer Sir Ranulph Fiennes (pictured directly above)? Sir Fiennes was the obvious choice, according to Bearman as he mirrored the team’s adventurous ethic and its desire to explore the unknown.

“As for me,” said Bearman, “I’m 25 years in and I’m excited. I get up every morning with even more excitement than I ever did before for the next day. And, whether it’s the coffee or not, I don’t know, but I’m genuinely excited for the next 25 years. I think, the future is extremely bright for the business, and that this is a very positive step towards becoming that ‘best in the industry’ business. So, it’s exciting times ahead for us.”