Howden head on the "confluence of events" impacting the reinsurance market

Without data and analytics, businesses are flying blind, a dangerous activity amid even the best of market conditions - a phrasing most economists, statisticians and politicians would likely agree does not apply to the global economy at this time.

Speaking with Insurance Business during the 2022 Baden-Baden Reinsurance Meeting, Howden’s head of analytics David Flandro (pictured) emphasised the “confluence of events” currently hitting the reinsurance market. Extreme weather events are high on the agenda, he said, with Hurricane Ian representing a standout concern for the market as one of the largest ever insured catastrophe losses.

Another standout is inflation, the bond market and balance sheets, he said, with inflation at its highest rate in 40 years. These inflation/stagflation bond market conditions are having knock-on effects on the ILS and alternative capital markets, and the capital position of the reinsurance sector is changing for the first time since 2008.

“Then you’ve got the war in Ukraine which is contributing to higher spreads in bond markets and bond yields, and pursuant haircuts in asset markets. And that's another standout,” he said. “And then you have all the ‘usual stuff’ like cyber risk and what’s happening in the casualty market. So, one could argue that what we have here, for the first time since 2005, is a confluence of events that's creating a rapidly hardening market in reinsurance.”

Looking back over his career to date, Flandro noted that you’d have to hark back to 2005 to find an analogue for what’s happening in the market today. Taking cat losses, for example, he said, even 2012 with Hurricane Sandy wasn’t nearly as big as this year, and while 2011’s losses were bigger, in 2011 the market wasn’t facing the current convergence of external and internal challenges alike.

“In fact, in 2011 we had central banks printing money, asset prices marching upwards, reserving looking better than it had done a couple of years earlier,” he said. “Yes, we had large catastrophes, but the sector seemed perfectly able to navigate through it. In fact, it still finished the year with more capital than it started with.

“By contrast, it looks like this year, dedicated reinsurance capital worldwide is going to be impaired. This is a really stand-out year, there’s no doubt about it and we’re living through a year similar to 2005/2006, in the reinsurance sector anyway, in terms of the confluence of events affecting balance sheets as well as underwriting.”

Full Q3 2022 figures aren’t in yet, he said, but looking at the data from Q2, dedicated reinsurance capital was down 11% which was significant as a decrease of that size hadn’t been seen since the financial crisis. This year has seen the stock market and the bond market both drip in tandem – something that hasn’t happened to this extent since the early 80s.

Insurance and reinsurance P&C companies primarily invest in medium-to-high-grade, medium-duration, fixed-income securities, so as yields have risen, reinsurers' assets have declined on a mark-to-market basis. The bond market and stock market are down in the September 30 numbers compared to the June 30 numbers, he said, so it’s fair to say the number for reinsurers’ balance sheets for September 30 will be commensurately lower – not least because reinsurers are also going to start to report and incur losses from Hurricane Ian which will come through in Q3 figures.

Reinsurance is in a hardening market, he said, and while the rates as of January 1 2022 are not as high in absolute terms as they were in 2005, or indeed 2012, they’re rising at the most rapid clip he’s seen since 2005 and threatening to get back there.

“Some people define a hard market as when you can’t find capacity for a good client with a good Ioss experience,” he said. “And that’s happening. [The entire market] is having to change the structure of programmes to make sure that they get placed. It’s interesting as just a couple of years ago, we had people saying ‘we’ve finally flattened out the cycle, we have so much capital now that at least for the near term there won’t be any more great cyclical swings, because of Solvency II and the excess capital etc.’ But it’s all happening again to the surprise of some.”

This misinterpretation is not limited to players in the (re)insurance space, he said, as the economic consensus on inflation and bond yields was wrong until February of this year, before Putin’s tanks ever rolled across the Ukrainian border (as seen below). 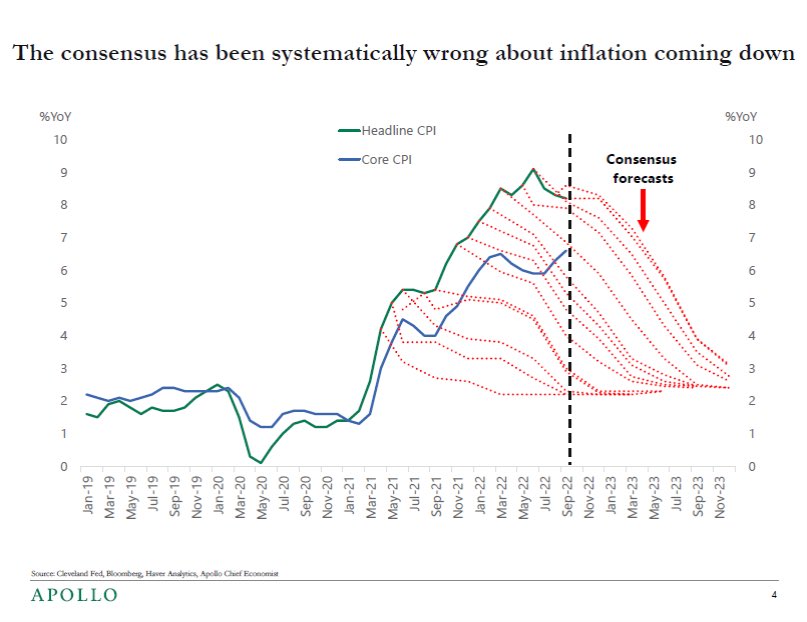 Examining how well-positioned the reinsurance market is to weather these storms, Flandro highlighted that fortuitously the market moved into this period better capitalised than it had been for several years. This was due to several factors, he said, including the entry of between $80-to-$90 billion of new third-party capital into the sector in the 10 decades prior to 2018, from pension funds and others – boosting its capital position.

It could also be argued the sector has had better regulation with Solvency II, though others might argue that it hurt returns on equity. The third factor was quantitative easing, and the back-end of a 40-year-long bull market in bonds. So, the market was very strong coming into this period, he said, but the challenge is that many of the factors that made it strong are now starting to be challenged – whether that’s the decline of the bond market and asset market, or that third-party capital simply isn’t being topped up in the same way that it used to be every year.

“We've stayed at around the $90 - 100 billion mark in third-party capital in the sector since about 2017,” he said. “And now secondary cat bond market pricing is really declining quite rapidly… that portends real difficulty in issuing new cat bonds. That's happening now, and having a knock-on effect in the retro market as well. All of those things together mean that the premiums:surplus ratio of the total global reinsurance sector is rising.”

Taking a historic view, he said, it was normal for the reinsurance sector to have more premiums than capital as diversification was thought to offset surplus requirements. However, in the last 10 years, reinsurers have shifted to having more capital than premiums, because capital has risen rapidly due to quantitative easing, more third-party capital etc. But looking at the figures for this year, it seems estimated premium levels are rising to potentially reach or even exceed estimated dedicated capital for the first time since the financial crisis. 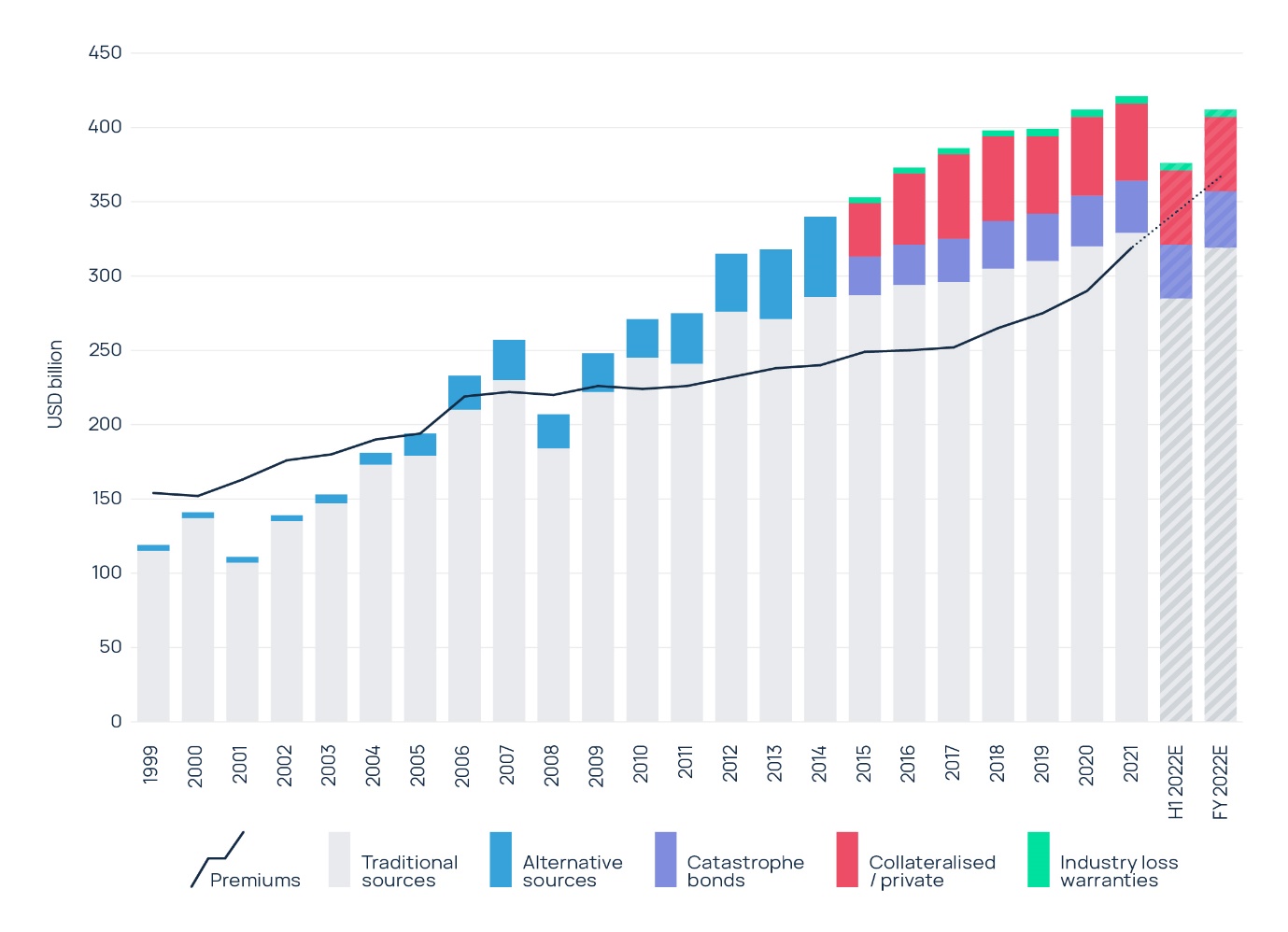 “We don’t know that yet, because we won’t see the Q4 2022 figures until next year,” he said. “Maybe the stock market will recover, it often does at the end of the year. Maybe the bond market will recover too. But we’re getting to the point where premiums and capital are getting very close to one another. Does that mean that we're less well positioned to weather difficulties? I suppose it does, at least compared to recent years.

“If we compare the capital position of the sector on paper at the end of this year to the end of last year, then yes it looks like we have more risk and less capital… And that’s important because it’s always earthquake season and it’s always terrorist season. So, if we have a really big, unexpected shock loss, we could get into an environment where at the periphery of the sector, we start to have liquidity issues.”

The market is less well-capitalised relative to risk than it was a year ago, he said, but it has traded through similar conditions before and indeed, up until about 2005, it was perfectly normal for the sector to have a premiums:surplus ratio that was higher.

“And that’s the world we’re in now,” he said. “We're not in the world of 2020 or prior, when we had significant excess capital. We’re now in a world where capital and risk are more finely balanced.”