There can be little question that the current geopolitical climate is the most turbulent it has been for quite some time, and the Global Peace Index recently highlighted that the level of civil unrest worldwide has doubled in the last decade. The World Economic Forum (WEF) recently published its survey on ‘Regional Risks for Doing Business 2020’ which identified that among the risks facing businesses globally “profound social instability” registers as a top concern.

Chris Kirby (pictured above), head of political violence and terrorism at Optio noted that the political risk landscape of the UK is particularly interesting right now as there are so many elements coming together, not least among these being Brexit and the COVID-19 crisis.

“Obviously, we are in completely unchartered territory, and it’s unprecedented where we are as an industry,” he said. “There are factors which are lending themselves to this uncertainty. [This includes] the general change in market conditions, which were apparent even before the pandemic. And certainly, the London insurance market, prior to the beginning of the year, was starting to show signs of hardening… And that was really in reaction to the number of loss-making years that we’ve seen over recent times.”

In addition to the retraction in capacity which has been seen in the London market, he said, further turbulence has been lent to this political environment due to the last six months of being in a lockdown or semi-lockdown state, and the fact that a sizeable proportion of the population has been furloughed. This is in addition to the level of employment uncertainty, especially around the hospitality and entertainment sectors, as well as the general downsizing across all industries as companies start to see lower demand for their services, and realise the need to start streamlining their operations.

“From a political perspective, as an underwriter in the market, what we’re seeing are the knock-on effects of companies looking far more at what they’re buying from a civil disturbance perspective,” he said. “Businesses are checking whether they’ve got the right level of coverage in place for events such as looting or denial of access… and that’s really being driven by the fact that the property market is excluding a lot of those strikes riots and civil commotion perils which historically have been written into the property programme. So, we are seeing a demand for that standalone coverage in the specialty market.”

Examining the turbulent political environment, Bernie de Haldevang (pictured below), the head of credit, political and crisis at Canopius noted that it was always a danger that government measures around the world to contain the virus might have greater consequences for society than the virus itself. 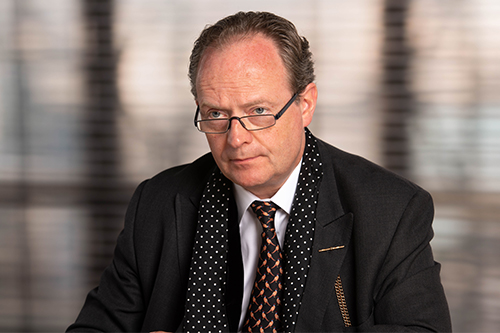 One of the key factors which might prompt demonstrations, or perhaps even civil disobedience, which one hopes will not happen, during any second lockdown, he said, is that the tactics used by governments to encourage people to accept the first lockdown are less likely to be as effective the second time.

If the death rate of the second wave is substantially lower than from the first, he said, and it emerges that the overall death rates broadly compare, say, with normal annual death rates, then more people may start to question why a second lockdown is necessary.

The UK has been very fortunate in that it has not seen the level of civil unrest that other areas of the world have, Kirby noted. However, there is the very real concern that a second lockdown could add more fuel to the fire of civil discontent being sparked by mass furloughing, rising unemployment and the general unhappiness surrounding politics in general. It is not beyond the realm of possibility, he said, that the UK could start to see political demonstrations in its major cities in the coming months.

Read more: MD on how brokers can prepare for a second wave of COVID-19

“The potential for a political backlash against a government response is a daunting prospect,” de Haldevang said. “During the first lockdown, most people were genuinely frightened of the disease and what it might do. Crime rates generally went down during the first lockdown; that may not hold for the second one. People are now more cynical, and are less tolerant of the curtailing of their freedoms, which may result in many questioning further measures by governments.”

In addition to many finding the latest rules confusing and illogical, he said, there are further concerns around furlough schemes not being adequately extended and people losing their jobs. It seems rational that this may lead to a rise in crime rates should people struggle to get food for their families.

“We saw that towards the end of the first lockdown in Italy, where some people were absolutely desperate and unable to leave their homes or buy food,” de Haldevang said. “There were scenes in social and public media of desperate parents going out to try and steal food because they didn’t have any money. While I doubt that we would see this in the UK, this situation could happen elsewhere in the world if the potential long term effects are not heeded by governments when reacting to stop the short term spread of the virus.

“More importantly perhaps is the extended use of emergency powers in the UK. This looks like a threat to democracy, and if it does turn out that ‘Lockdown 2’ was not necessary, governments will pay a heavy price at elections in the future.”