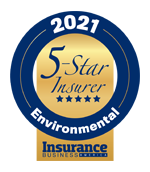 Storage tank liability insurance covers the cleanup costs for leaks and other pollution resulting from storage tanks, whether below or above ground.

“Largely used by insureds to satisfy USEPA Financial Responsibility rules and regulations, this product provides protection against third-party bodily injury, property damage and corrective action costs as a result of pollution incident originating from a covered storage tank system,” says Aspen’s Michael Padula. “Much like a life insurance policy, insurance for ‘advanced age’ storage tanks gets more expensive and harder to place as the storage tank system gets older. There are still markets considering these risks, but with more restrictive terms and conditions.”

“Coverage is scarce for those owners of tanks that are over 30 years old,” adds RT Specialty’s Jeff Slivka. “Few options are available, and if it’s acquired, it could come with larger deductibles in the $100,000-plus range. It may be a better approach for those owners to strongly consider removing or replacing the tank altogether.”

What does storage tank cover?

How much does this insurance cost?

Oil tank insurance can cost $750 for a minimum premium, with different limit options nearing $5 million, and term policies available from one year to three years.

Heating oil tank insurance, for instance, costs roughly $67 per year. The costs of a new tank, on average, is $2,500. That usually covers backfilling and replacing the sod and the price of a new tank. But it does not cover soil clean up in the event of a leak, nor replacing objects or structures that covered the tank. The average homeowner in Washington State occupies the same house for a decade. It is difficult to monitor the condition of an oil tank since most are buried underground. Materials that are buried, typically, will decompose, but how long it would take for an oil tank to rot is dependent on the acidity of the soil. The majority of oil tanks, however, last 20-60 years.

Why is storage tank liability important?

Storage tank liability covers the clean-up cost at an owner’s facility that may arise from scheduled tanks’ release. It also covers property damage resulting from scheduled tanks and third-party bodily injury. This type of liability provides third-party claims with a legal defense in the event of a suit against the owner. This policy or certificate also meets state and federal requirements and, in most cases, is necessary to do business.

There are 3 reasons specifically why tank liability is important. The first reason is that tank operators and owners require evidence of responsibility financially. The second is that this policy meets the state and federal requirements. Thirdly, it provides an alternative to state funds that is more stable financially.

The most dangerous potential hazard of a faulty underground storage tank, for example, is that hazardous substances or petroleum can leak into the ground, contaminating groundwater, which is where nearly half of people in the United States get their drinking water. Other environmental and health risks like potential explosion or fire can arise from a leaking UST.

What qualifies as an Underground Storage Tank?