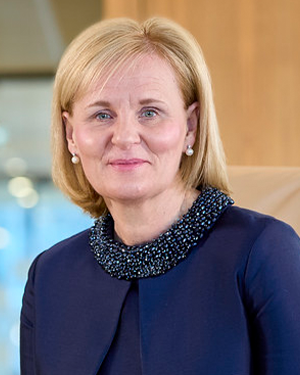 Amanda Blanc is the Group CEO of Aviva, the UK’s leading insurer.

Amanda was born and bred in Wales, having grown up in the Rhondda Valley, and many of her family still live there.

She started her career as a graduate at one of Aviva’s ancestor companies, Commercial Union. Following success in senior executive roles across the insurance industry, she came back to Aviva as CEO in July 2020.

Amanda set out a new strategy to simplify the group’s portfolio of businesses, transform performance and build financial strength.

Within her first eight months, she announced exits from eight markets to focus Aviva on the core businesses of the UK, Canada and Ireland.

Amanda is focused on improving customers’ experience and transforming performance by digitising, automating and simplifying the business. She also powered up the Aviva brand by launching a new positioning and identity to promote the breadth of Aviva.

Under her leadership, Aviva is leading by example on climate change. Its goal is to become a net zero company by 2040 - the most demanding target of any major insurer in the world.

She has previously served as Chair of the Association of British Insurers, Chair of the Insurance Fraud Bureau and President of the Chartered Insurance Institute.

In 2021, Amanda was awarded the Women in Insurance Outstanding Achivement Award and recognised in the Forbes list of the World's 100 Most Powerful Women.

Amanda is an Associate of the Chartered Insurance Institute and has an MBA from Leeds University. She also holds a BA (hons) in history from the University of Liverpool.

In 2020 Amanda led the Government’s independent review into flood insurance.

In 2021, she was appointed by HM Treasury to the role of Women in Finance Charter Champion and elected to join the Geneva Association Board. Amanda is also a member of the UK Government’s Financial Services Trade Advisory Group. She is a proud supporter of the Welsh rugby team and is Chair of the Welsh Professional Rugby Board.