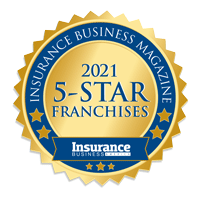 The votes are in, and nine companies have earned the distinction of being named market leaders as one of Insurance Business America’s 5-Star Insurance Franchise Groups. To uncover the best franchises in the industry, IBA’s research team conducted one-on-one interviews with agency owners over a 15-week period to gain a keen understanding of what they value and appreciate in the franchises they are a part of. Participants were first quizzed on what features they thought were the most important, and then asked how their franchise’s home office rated in nine categories: marketing, general support, product range, entry price, fees and charges, training, technology, financing options, and commission rates.

To kick off the process, franchise home offices were asked to put forward a nomination, describing how their franchise model stands out against competitors. IBA then reached out to agency owners, asking them to rate their overall satisfaction with the franchises they deal with. Franchise groups that rated 80% and over were named 5-Star Award winners for their excellent service and performance.

These results are valuable not only to the winning franchise groups, but also to the industry as a whole. The 5-Star Awards provide added exposure to companies that go above and beyond to give their clients top-of-the-line service. Companies use these awards to gain a clearer understanding of how the market views their products and insight into which products are successful in the eyes of the industry. These 5-Star Awards give agents who are seeking to start or grow their business using a franchise partner an upper hand when deciding which franchise to work with.