by Insurance Business 13 May 2014
SHARE
There were 110 announced merger and acquisition transactions within the insurance agency space in the US and Canada during the first quarter of 2014, an analysis from agent-broker advisory firm OPTIS Partners found.

That’s the strongest start for M&A activity in at least seven years, and 2014 has the capacity to be record-setting if the sector continues to consolidate at the rate established through April, says OPTIS Managing Director Timothy Cunningham.

“While it’s still early, 2014 could surpass the record set in 2012. Buyers continue to be hungry and aggressive for deals, and there’s a robust inventory of sellers,” Cunningham said.

The surge was led by Hub International and Assured Partners, both of which purchased 12 agencies so far. Arthur J. Gallagher trailed behind with six acquisitions, followed by Cross Insurance and USI Holdings with five each. 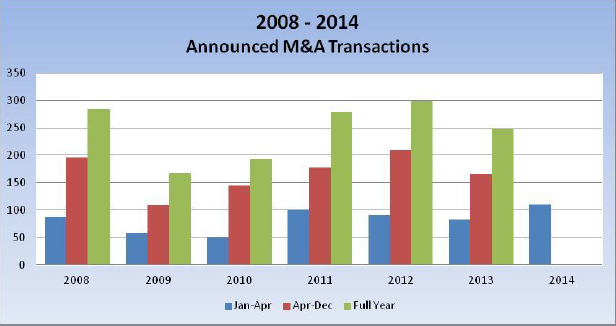 More generally, privately held buyers and firms backed by private equity were responsible for nearly 80% of all announced M&A activity in the first months of 2014. By contrast, all other major categories of buyers increased their transaction counts except for the All Other category, including banks, insurance companies and “others.”

There have been a total of 57 buyers thus far in 2014, a pattern which remains consistent with the past three years. Of the “top 20” buyers this year, only one—Digital Insurance—had fewer transactions in 2014 than in the same period last year.