Florida ratings agency consultation – a "waste of the taxpayer's money"?

Florida has committed funds to hunt for a replacement ratings agency as the Florida Office of Insurance regulation (FLOIR) goes head-to-head with ratings agency Demotech – but not everyone is convinced that its consultation is the best use of public funds as the Sunshine State continues to battle a property insurance crisis.

Demotech president Joe Petrelli, meanwhile, has pledged that the agency will soon debut “groundbreaking” research that will show there is “more to this crisis [in Florida homeowners’ insurance] than meets the eye”.

The consultation, according to deputy CFO Julie Jones, could see the creation of a “public ratings agency”, with findings set to be presented to the executive governor’s office and the legislature in 2023.

The department expects “several competitive bids” during the process and hopes to keep costs below $1.5 million, Jones told the commission.

At least four other ratings agencies are understood to already be acceptable to the GSEs. Florida insurers are not required to be A-rated. However, federal mortgage providers Fannie Mae and Freddie Mac will not accept customers who do not have home insurance from an ‘A’ rated provider.

Mark Friedlander, Insurance Information Institute (Triple-I) communications director, went so far as to query whether the consultation constituted a waste of public funds.

“We feel the approval of the $1.5 million budget to hire a consultant was a poor decision by a bipartisan group of legislators [measure received unanimous approval of the committee] and a misuse of the taxpayer’s money,” Friedlander told Insurance Business

The legislature’s turn on Demotech marks a US-wide first, according to Friedlander.

“We had never seen officials in any state publicly attack the integrity of a third-party insurance rating agency before what happened in Florida in July,” the Triple-I comms boss said.

Most Florida residential insurers would be unable to qualify for financial ratings from global ratings agencies due to their current capital position, else they would be rated “much lower” than the ‘A’ they may be assigned by Demotech, according to Friedlander, who said this assertion was based on conversations Triple-I has had with ratings agencies.

Consumers “have the right to know their home insurer is financially stable and can pay its claims when they suffer a loss, which is why obtaining a credible rating from an independent third party is so essential,” Friedlander further set out.

“It is not appropriate for state leaders to interfere in this process,” he said.

Triple-I and other market sources have argued that Florida’s insurance problem has been driven by fraudulent roofing repair schemes and incentives for claims litigation – Florida accounts for 79% of litigated home insurance claims US wide, despite accounting for only 8% of claims, according to Florida Governor’s Office data frequently cited by stakeholders.

“Failure of the state’s legislature to effectively address the root causes of the Florida insurance crisis – rampant roof replacement claim schemes and runaway litigation filed against insurers – is what is causing further instability in the market,” Friedlander commented.

“We’ve already had competition for a very long time and when we got involved in 1996 we were actually the new guy,” Petrelli said.

“If somebody wants to spend up to a million and a half dollars to find additional competitors, then that’s certainly their prerogative,” the ratings agency boss added.

Petrelli insisted that the ratings agency’s strategy has remained “consistent”, with its chief ratings officer and ratings manager having both been on board since at least 1996 and 2005 respectively.

“We’ve been absolutely consistent, and we’ve had the same people being consistent for 26 years,” Petrelli said.

“I’m at a loss to understand the other side of the equation here.”

“Blaming the scorekeeper, I guess it’s part of what happens to every ratings agency – but I don’t think the scorekeeper and the market conditions are one and the same.”

Demotech is in the process of drafting a preliminary report, Petrelli said, that he believes will further show why Florida represents such a chunk of homeowners’ litigation.

As for next steps, Petrelli said: “We’re looking forward to spending another 26 years assisting Floridians and insurance companies in Florida.

“There’s only so much we can do as a scorekeeper, but we’re gonna continue to keep score.”

Demotech’s July warning that upwards of 17 businesses could be set to lose or have their ratings downgraded appeared to spark fears among FLOIR and others, triggering responses from Insurance Commissioner David Altmaier and Florida CFO Jimmy Patronis.

“OIR is compelled to take the extraordinary step of scrutinizing these unprecedented actions to protect the Floridians we serve, especially two months into hurricane season,” Altmaier wrote to Demotech in July.

“This is an example of inconsistent, monopolistic power of a select rating agency and is trying to exert coercive influence over Floridians and policymakers in an effort to thwart public policy according to its own opinions.”

The ratings agency was also slammed for using “conjecture” as part of its process in Patronis’ letter that same month to the GSEs.

Kyle Ulrich, CEO of the Florida Association of Insurance Agents, labeled Demotech as “monopolistic” and accused the organization’s president of “grandstanding” in a July blog.

In response to the feared downgrades, FLOIR sought to establish what has been referred to as a “temporary reinsurance” plan, expected to be run through insurer of last resort Citizens, now the largest property insurance provider in the state.

The forewarned rash of downgrades failed to materialize. As of September 9, when the committee approved the consultation budget, just one company had been downgraded and two had lost their rating, according to a briefing document prepared for the legislature.

Among the casualties, though, was United Property & Casualty Insurance, estimated to have 185,000 residential policyholders in Florida. UPC said it would look to an orderly run off, though Triple-I analysis suggested the insurer could be on the “verge” of failure.

Ohio based Demotech, gained a foothold in the Floridian market back in 1996, in the aftermath of 1992’s Hurricane Andrew, amid a slew of carrier failures and exits.

The market is again struggling financially, despite not having felt a major storm hit since 2018’s Hurricane Michael.

Read more: Florida and Louisiana in crisis – a tale of two states

At time of writing, five Floridian property insurers have failed, and warnings have come – not just from Demotech – that more could follow.

“ALIRT expects additional market exits and potential insolvencies in the Florida market given current financial profiles of a number of these smaller Florida domestic insurers,” was the message shared with Insurance Business by ALIRT in July.

“In fact, our April update on the Florida homeowners’ market noted that almost 70% of these dedicated Florida insurer[s] had ALIRT Scores that fell into its ‘red zone’ indicating potential remedial actions needed.”

S&P data, supplied by Citizens, has showed that of the top 10 Florida domestic homeowners’ insurers, just two booked a net underwriting profit in 2021, with none seeing profits in 2019 or 2020. 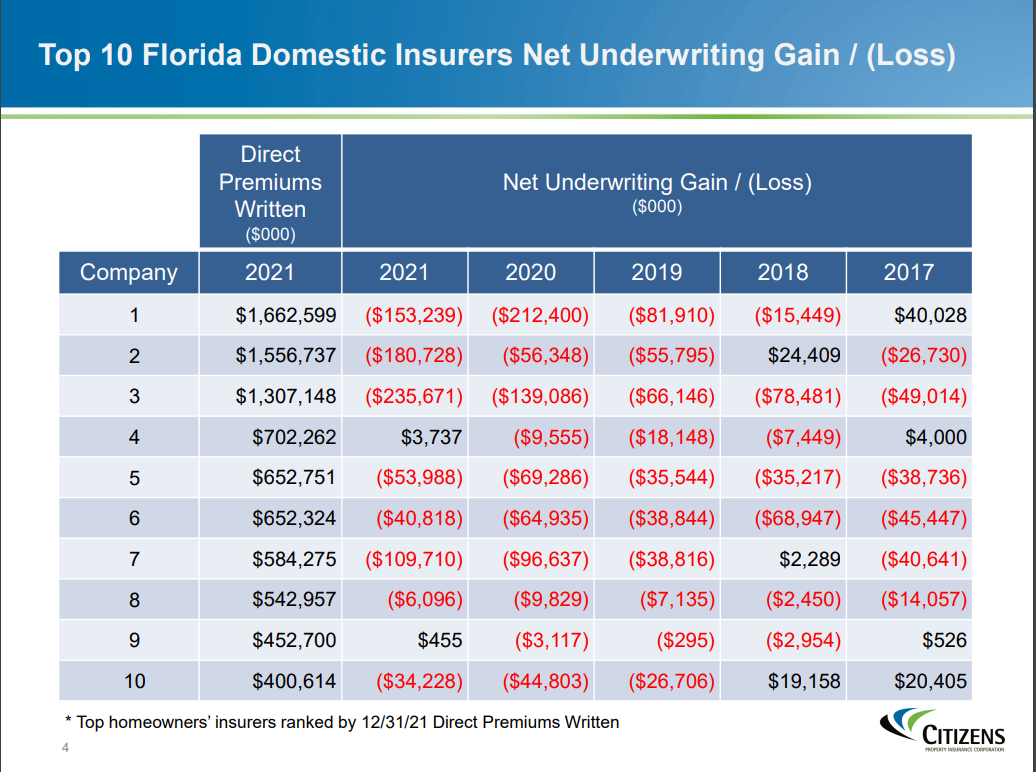 When approached by Insurance Business on the Demotech issue, FLOIR pointed to previous Bills that have passed through the legislature, tackling areas like assignment of benefits (AOBs) and claims transparency.

“Florida has enacted historic and unprecedented reforms designed to promote market stability, but the impact of these reforms will take time,” said a FLOIR spokesperson.

“OIR is committed to working alongside Governor DeSantis, the Florida Cabinet and the Florida Legislature to promote a stable and competitive insurance market for consumers.”