The 15 countries with the longest life expectancies

by Kendall Greenwood 02 Jul 2014
SHARE
Life spans are growing greatly in the world. Advances in medicine and what it means to be healthy have enabled us to live longer, more prosperous lives. Clients of life insurance will be looking for a policy that will fill all of these years.

Data released by the World Health Organization (WHO) of life expectancy in 2012 by country reveals the 15 countries with the longest life spans. 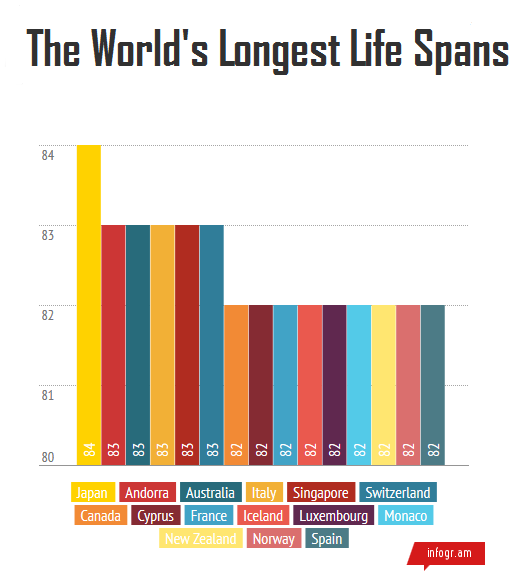 Japan’s life expectancy remains the longest, as it has been for some years. WHO finds that the majority of health-related statistics in Japan continue to improve. This includes life expectancy and under-five mortality rate.

The United States’ life expectancy at birth is 79-years-old, just five years below Japan. This ranks the country at the 30th spot according to WHO’s data.

Interestingly, a longer life expectancy in the US has caused an adverse effect for the life insurance business. There are not as many consumers looking for these insurance policies as there once were. LIMRA finds that because life spans are longer, the urgency of getting life insurance has dissipated.

This does not mean that life insurance is not needed, though. According to LIMRA’s ownership studies, 56% of 18- to 34-year-olds need more life insurance due to their age.

LIMRA also found that four in 10 households with children under 18 “say they would immediately have trouble meeting everyday living expenses if a primary wage earner died today.”

The consumers that are searching for life insurance are doing so out of want of protection.

“We continue to see consumers express more concern about living too long, or outliving their assets, rather than dying too soon,” said Kate Theroux, Assistant Vice President and Director of Public Relations at LIMRA.

For 75% of Generations X and Y, the highest concern is having enough money for a comfortable retirement.

You may also enjoy: "How your language is killing your life insurance sales"
"The 'sloppy mistakes' that lead to life insurance agent lawsuits"
"The age group you should be targeting for financial planning: Study"
SHARE
Fetching comments...