The world's most common natural disasters by country

by Kendall Greenwood 23 Jan 2015
SHARE
If nothing else, California’s earthquake is a reminder that nature doesn’t always play nice. Floods, cyclones and the like take a toll everywhere they hit. But just where do these disasters occur the most?

According to the International Disaster Database, each country is faced with different disaster challenges. Accumulated from the past 114 years, their system tells us what the most common catastrophes are and how to prepare those looking for insurance.

The U.S. disasters have the highest common occurrence, with 735 instances between storms, floods and tropical cyclones. Severe storms are the most likely. In 2013 alone, 54 percent of disasters were classified as storms, amounting to a total of $12.46 billion in insured losses for the year according to Aon Benfield.

While storms rank at the top, United Policyholders’ Executive Director Amy Bach says the second most likely disaster is one most problematic for insurance consumers.

So far in 2014, Aon Benfield has reported flood insured loss costs at $10 million. 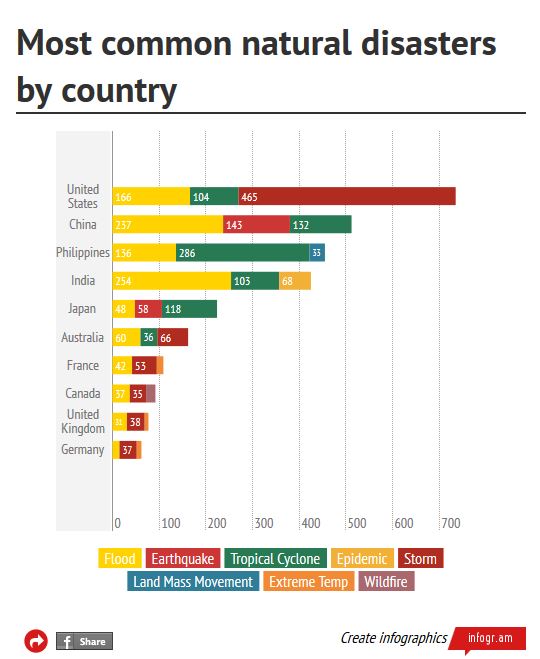 This is a common thought for consumers. Too many times Americans think they are prepared for a natural disaster, but then find out later that nothing could be further from the truth.

The problem, according to Bach, is seven misconceptions made by those looking for insurance.

1)    The federal government will come in after a disaster, so it’s not as important to worry about insurance because if a real big disaster happens the government will take care of you.
2)    I have insurance, so that means I’m covered.
3)    All insurance policies are the same. It doesn’t matter who you get them from or what they are, they are all the same.
4)    When an agent recommends more coverage, they are just trying to increase commission.
5)    People just assume they can rely 100% on their agent, broker or insurance company to set their limit adequately.
6)    If there’s never been a disaster in my area before, I don’t need insurance for it.
7)    The cheapest policy is the best policy.

Some of these are straight myths, but others have consumer reason behind them. For example, Bach attributes getting the cheapest insurance policy to the type of advertisements auto insurance companies put out.

“A lot of auto insurers advertisements are all about cheap, cheap ,cheap,” said Bach. “There’s a lot focusing on ‘we’re going to save you money’.”

As a result, consumers assume that the cheapest policy will be the best.

To prevent consumers accepting these, Bach suggests using an organization like United Policyholders. What consumers will not accept as fact from an agent, they will accept from third party information.

“Consumers have unrealistic expectations of insurance that don’t reflect the reality that insurance policies are legal contracts with lots of fine print,” said Bach.

You may also enjoy: "Storm-related claims dampen carrier profits"
"So far, so good? $22 billion paid out for cat this year"
"$2.2 billion agriculture loss in California may shift crop insurance purchases"