Top 10 states with the oldest employees

by Kendall Greenwood 20 Feb 2015
SHARE
More than 40% of staff members in an average insurance agency are older than 51, according to Marshberry research.

For those following the industry's impending talent gap, this number comes as no surprise. Insurance companies across the board need new talent and several organizations are paving the way to find it. However, finding the right talent will be difficult unless insurers know where, and where not, to look.

The Bureau of Labor Statistics’ 2013 preliminary annual employment demographics report pinpoints the states with the highest ratios of employees 65 years and older.

At 8.3%, Montana shows to have the greatest population of employed persons in this age group. Of its 483,000 active employees, 40,000 are 65 years or older. This is almost 3% greater than the United States as a whole.

With the highest percentage of older workers, Montana is certainly not exempt from the need for young insurance hires. 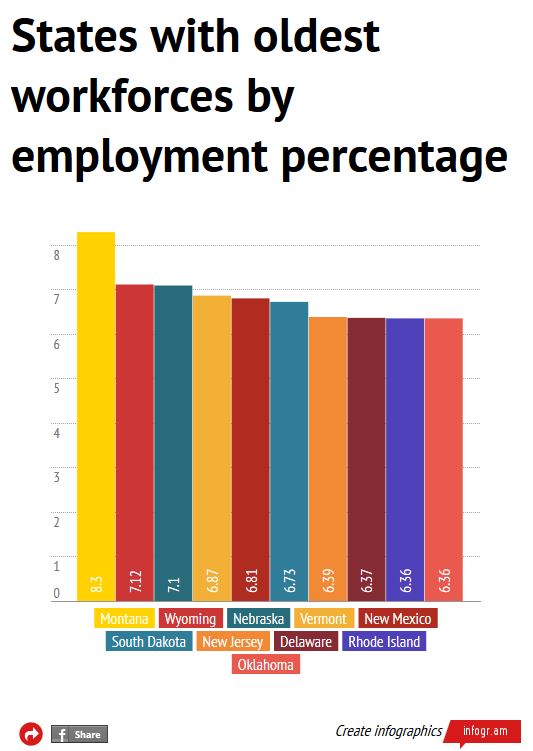 Tim Davis, sales manager at The Insurance Shop, says there are a few things agencies can do to inspire young applicants and uses his own company to prove that it’s true. The Insurance Shop’s producers and CSRs are all under the age of 40. Total, 21 of the agency’s 24 staff members are within that same age group.

Located in Missouri, where employees 65 years or older amount to 5.4% of the market, this shop proves to be an anomaly in the insurance industry.

Ironically enough, it all happened by accidentally creating a company that forms to young generation interests.

“It wasn’t necessarily a planned thing,” Davis said. “But our agency is perfectly suited for millennials because we are built around technology, speed and ease of doing business.”

Outside of their core business model, The Insurance Shop has many other factors that Davis attributes to their office age.  For one, they thought out of the box when looking for the best people to fit their atmosphere.

“We’ve been so successful because we don’t try to find or recruit people with insurance experience,” Davis said. “We are just looking for the best sales people.”

They also offer a salary for the first five years of employment for producers, pay their CSR’s hourly to avoid loads of overtime and flaunt a casual dress attire.

“Today I’m in shorts and tennis shoes,” Davis said during the interview.

He describes his producers as aggressive, highly motivate employees who are there to write business.

Jim Lynch, the chief actuary and director of research and information services at the Insurance Information Institute, has experienced the same type of enthusiasm in property and casualty insurance.

“I was doing volunteer work at the Actuarial Society of New York for college students who want to be actuaries,” Lynch said. “And just the line to talk to the recruiter next to me was about 30 people deep.”

According to Lynch, students are learning that insurance isn’t the boring industry it’s been stereotyped as.

Nonetheless, those employed at 65 years and older have increased in the last three years greatly. Almost all of the “oldest” states had an increase in older employees by at least 1%. Wyoming’s ratio increased from 4.31% to 7.12%.

To encourage more young professionals to get involved, Davis said agencies need to adapt to a new way of life.

“We don’t want producers to have to work long hours. If they are working more than 45 or 50 hours a week we have a conversation about work flow,” Davis said. “I am very afraid of burn out.”

University connections are what will also keep you current according to Lynch.

In the past five years, just two producers have left The Insurance Shop.

“You have to be willing to provide younger hires a good reason to join your agency and show them why they’ll be successful there,” Davis said.
SHARE
Fetching comments...