The top states at risk for wildfire damage: Report

by Donald Horne 03 Mar 2015
SHARE
Wildfires have caught the headlines with the spectacular footage they provide for local TV news outlets – but where are the worst areas for wildfire, and what role should the insurance producer fill?

“Awareness of wildfire hazard and geospatial knowledge of the risk as it relates homes and businesses is vitally important for the insurance and mortgage industries,” states the 2015 CoreLogic Wildfire Hazard Risk Report, which examines the residential properties potentially exposed to wildfire risk in 13 western states, “as well as for municipalities and ultimately those most directly impacted, homeowners.”

Wildfires in 2014 in the western states – although trending downward in the number of fires and acreage burned – was unusual in the large number of early wildfires in California. 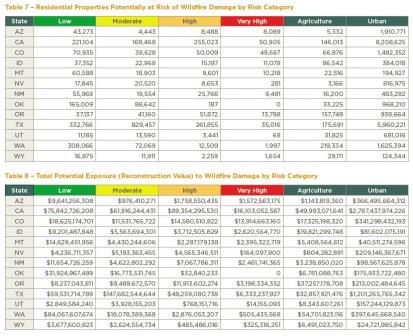 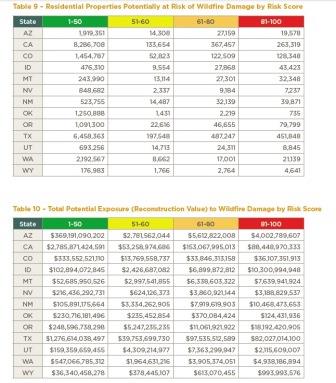 In addition, there was an outbreak of more than a dozen wildfires in San Diego County over the course of several weeks – but did not grow into the type of large damaging wildfires that have been seen in sourthern California over the last 15 years.

This report provides a comprehensive evaluation of the total number of properties at each risk level, along with the estimated reconstruction value of the single-family residences at risk in the region. In addition to the total estimate, a summary of the properties at risk and the associated single-family home reconstruction cost is provided for each individual state, as well as tables that provide similar information for several metropolitan areas across the country.

“It is crucial to evaluate the immediate threat of wildfire based on both the risk factors located within the boundary of an individual property and the proximity of adjacent undeveloped areas,” states the report, which breaks down the threat by four western regions.

In tables 5 and 6, the regions of the Desert and Pacific Southwest and the Southern Rockies and South Central U.S. show a greater potential exposure at risk of wildfire damage by risk score and by reconstruction value. 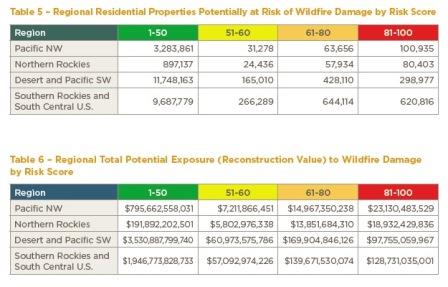 But the study does more than just identify large, general swaths of the highest potential risk areas. According to Dr. Thomas Jeffrey, senior hazard scientist at CoreLogic, the data also reveals that new homes and businesses are especially exposed to wildfire damage.

“New home construction in and around urban areas tends to occur on the outer edge of current development,” Jeffery said. “The fact that newly constructed homes are likely to be located in areas that would be in close proximity to wildfire risk is an important consideration for brokers and agents.”

He added that agents assessing quotes for homes and businesses in “urban” areas should check to see whether the buildings are in close proximity to high fuel concentrations outside the actual urban or parcel boundary. If they are, this could affect their policy premiums.

One thing it should do is influence the coverage producers offer. Home and business owners at risk of wildfire damage would do well to purchase comprehensive property or homeowners policies, which cover some unique damages inflicted by flames.

“Smoke claims are just a plain nightmare. Insurance companies are all over the place on it, and some carriers don’t cover it at all,” Putnam said. “Heat damage is another. They create a lot of angst when people call in to file claims.”

These lessons aren’t just for producers and clients who live in the areas outlined in the study. Jeffrey says no one should write off wildfire risk simply because they don’t sell insurance in the generally-acknowledged hotspots.