by Caitlin Bronson 11 Aug 2014
SHARE
The property/casualty insurance sector took a hit when the economy tumbled in 2008, but strong markets and fewer catastrophes helped make 2013 the best year for the industry since the financial crisis.

Net income from P/C premium increased 54.7% from 2012, according to AM Best, for a total of $43,029mn. And while nearly all states enjoyed some measure of growth in recent years, a few led the pack in premiums written, benefitting both insurers and their appointed producers.

North Dakota was by far the nation’s growth leader, with premiums written expanding by 58.4% since 2007, SNL Financial found. Neighboring state South Dakota followed, with a 25.4% increase. 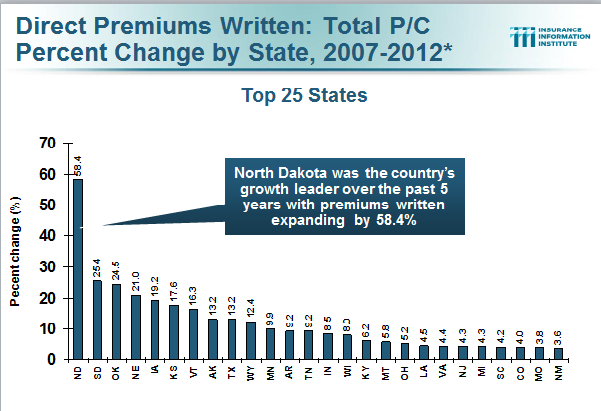 “Our economy never took the 2008 hit, so home building continues to be strong,” Dawson said. “It’s also fueled in part by the oil fields in western North Dakota.”

Indeed, North Dakota’s population has boomed since 2007 and its crude oil output surged ahead to make it the second-largest oil producing state in the US after Texas. It also has record-low unemployment, with just 2.6% of North Dakotans out of work.

All of that economic growth means greater liabilities, and greater need for insurance to protect against those potential risks. Even the service sectors in the state are reaping the reward.

The story holds for other states in the Midwest, who can expect continuation of P/C sales, particularly if the proposed Keystone XL pipeline is constructed.

You may also enjoy: "5 states where you don't want to file an auto claim"
"The 15 US states with the longest life expectancies"
"The 10 least financially literate states: Study"