The 15 US states with the longest life expectancies

Last week Insurance Business America looked at country life expectancies and what that means for the life insurance industry. This week we are bringing that data a little closer to home.

The 2013-2014 American Human Development Report by the Social Science Research Council reveals the 15 US states with the longest life expectancies. 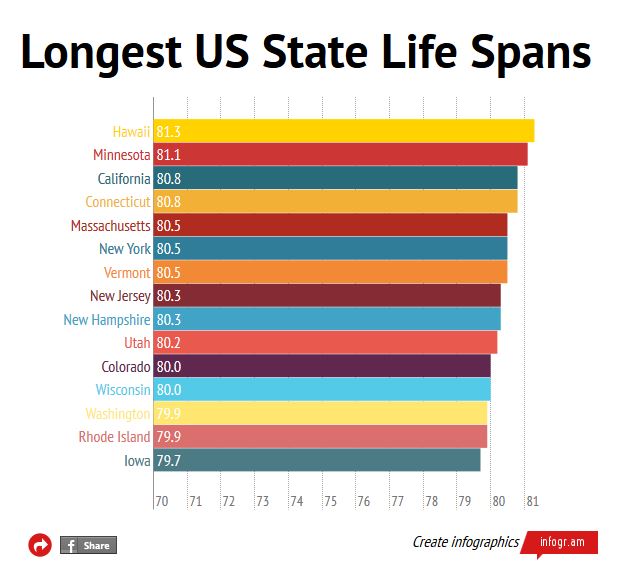 Hawaii has remained the state with the longest life span for some time. With an expectancy of 81.3 years, it exceeds the national age of 79 by 2.3 years.

Mississippi was ranked the state with the shortest life span out of all US territories. Their life expectancy at birth, 75 years, is four years below the country average. According to the Social Science Research Council, Mississippi has “life spans and earnings of the typical American in the late 1980s.”

Steven Weisbart, Senior Vice President and Chief Economist at Insurance Information Institute, says an increase in life expectancy is nothing new for the life insurance industry.

“Nationally this is not a new idea, within the states there have always been differences,” Weisbart said. “All this data does is provide an update to previous data that also showed significant differences in life expectancy.”

However, the current state of life insurance in connection with these life expectancies offers an opportunity for agents to build their clientele.

Life insurance premiums have been steadily going down over the last three to four decades says Weisbart. They have continued to decrease because of factors like better medical health that elongate life span.

Nonetheless, LIMRA finds that life insurance being too expensive is the highest ranked choice for not purchasing. In total, 66% cite this as a reason, with 34% saying it’s the major reason.

Three in 10 U.S. households have no life insurance while 58 million households believe that they need more.
This coverage is needed, but is steadily being ignored. The effect life expectancy has on premiums, however, leaves an open window.

“I would say agents should use the information that mortality rates are dropping and premium rates are quite low to approach people about buying life insurance,” Weisbart said. “Especially in states where rates are lower than others, this makes a good opportunity to get the conversation going.”

Life expectancy data is an informative way to bypass the idea of life insurance being too expensive, because this is one of the very factors making premiums cost less money.

The Social Science Research Council analyzed data from the U.S. Census Bureau, American Community Survey 2010, the Population Estimates Program, Centers for Disease Control and Prevention and the National Center for Health Statistics to determine these statistics.