The states where insurance matters most

Insurance sales and related activities account for more than 2.5% of the US gross domestic product—a pretty impressive economic contribution in financially troubled times. In some states, however, the industry has an even larger part to play.

Data from the US Department of Commerce and the Insurance Information Institute suggest that states in the Northeast and Midwestern United States make up a large portion of state domestic product. In Delaware, for example, insurance carrier and industry activity contributed to nearly 13% of the state’s economic fortune.

The Midwest was the other region of note, with Iowa taking the number three spot at 7.77% and Nebraska coming in at number five with 4.59%. The insurance markets in Wisconsin and Illinois were also major players, accounting for 4.82% and 3.72% respectively.

Asked about the geographic trends, Insurance Information Institute President Robert Hartwig told Insurance Business history has a major role in determining where the insurance industry is most economically important.

“Those states tend to be home to many insurers,” Hartwig said. “That’s where they were formed, usually a century ago or more. While they now write in many states, they’ve maintained their headquarters in their home state—along with many of their employees—ever since.” 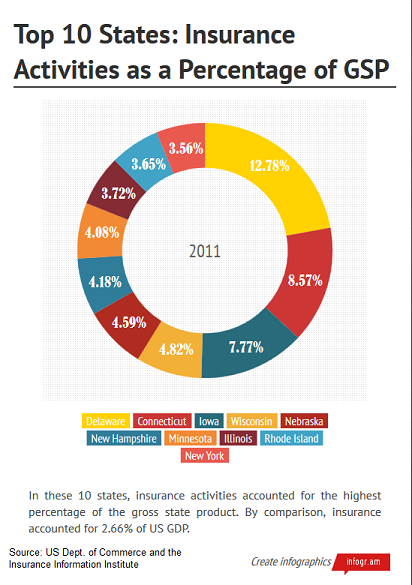 You may also enjoy: "The best states for P/C insurance sales"
"Judicial hellholes: States with the most class-action lawsuits"
"States where you don't want to file an auto insurance claim"