States with the most and least expensive workers' comp rates

by Donald Horne 02 Mar 2015
SHARE
A study on workers’ compensation premium rates issued by the Oregon Department of Consumer and Business Services (DCBS) has listed the most expensive states by rates in the nation.

The biennial study ranks all 50 states and Washington, D.C., based on rates that were in effect at the beginning of 2014. Despite extensive reforms designed to lower costs, California now has the most expensive rates in the nation, followed by Connecticut.

“We continue to see a trend in the distribution of state index rates in our study clustering in the middle of the distribution. A record 21 states are within plus or minus 10 percent of the 2014 study median,” states Mike Manley, one of the co-authors of the survey. “This makes the rank values more volatile from one study to the next. I would recommend that states look also to their ‘Percent of study median’ figure for comparisons over time.” 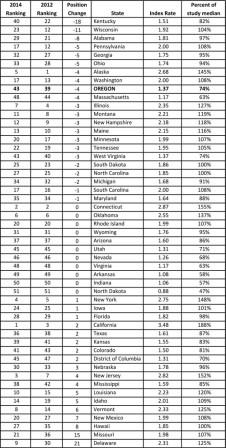 North Dakota came in with the least expensive rates.

Oregon researchers also compared each state’s rates to the national median (midpoint) rate of $1.85 per $100 of payroll.

Because states have various mixes of industries, the study calculates rates for each state using a standard mix of the 50 industries with the highest workers’ compensation claims costs in Oregon.

Looking at the chart, there were major drops in premium rank for both Kentucky and Wisconsin. Kentucky moved from 22nd highest in the nation to 40th, improving by 18 positions. Wisconsin moved down 11 spots, from 12th highest to 23rd. While Wisconsin did enact some changes in 2012, it is interesting to note that neither state is considered to have been a major reform state over the last few years.

For a couple of those states undergoing dramatic reforms, Oklahoma and Tennessee, it is too early to tell, as they are just implementing changes this year. Others, however, including California and Kansas, saw premium costs as a comparative rise despite reforms intended to do otherwise. Illinois, another reform state, did see some positive movement, but probably not statistically significant given the weight of their costs and issues in that state.

According to Robert Wilson of workerscompensation.com,  those living in New Mexico, Hawaii, Missouri and Delaware may be thinking of what changes should be in order, since they had dramatic negative movement on the scale this year.

“Even if past reforms overall are not showing to create significant improvement in these numbers, I am pretty sure they will be a better predictor of what states may be facing reform in the future,” states Wilson.

You may also be interested in: "State moves to opt out of mandated workers' comp program"
"Workers' comp industry leader to retire next year"
"Should workers' comp cover mental and emotional distress?"
SHARE
Fetching comments...