by Hanna Schieve 02 Feb 2018
SHARE
Tree-huggers aren’t the only ones fretting over chopped wood these days. Starbucks, Marks & Spencer, Cargill, and Kraft Heinz and other publicly traded companies risked nearly US$950bn in annual turnover related to deforestation last year, according to the Carbon Disclosure Project (CDP). And things are only going to get stickier in 2018 as deforestation climbs back to the top of the corporate agenda.

More than half of the countries in the Paris Agreement pledged to act on deforestation by 2020, meaning that regulations will start rolling out this year. That, coupled with budding investor and customer interest in corporate sustainability, has shot environmental, social, and corporate governance (ESG) deforestation risk into the top five 2018 environmental risks, according to Verisk Maplecroft’s new report.

The risks are expected to be particularly dangerous for businesses across the financial, commodities, and extractive sectors. Yet, while 87% of companies reporting to the CDP recognised deforestation risks – with 32% already seeing negative impacts on their business – only 13% had plans to mitigate the threat.

Financial sector
Reputational risks will feature prominently with regards to deforestation in the financial sector. “HSBC won’t be the only investor NGOs push into dropping funding for palm oil companies involved in deforestation,” said Will Nichols, senior analyst, environment and climate change at Verisk Maplecroft.

Last summer, the bank was at the centre of controversy when NGOs accused the company of funding palm oil companies responsible for environmental destruction. In response, CEO Stuart Gulliver committed to a stricter lending policy based on “no deforestation, no peat, no exploitation,” and acknowledged the obligation for the financial sector to play a greater role.

Moreover, fossil fuels aren’t the only products at risk of becoming stranded assets – forest-risk commodities could also fail to reach end markets. Indonesian palm oil producers, to name an example, can’t develop nearly a third of the land-bank that they own because of government regulations, according to a Chain Reaction Research report. 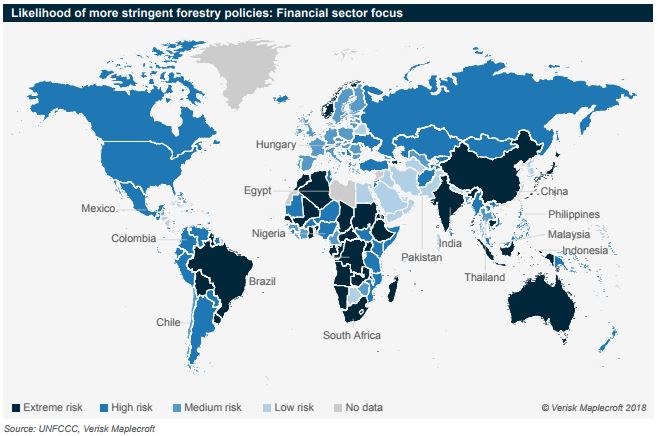 Commodities sector
Companies with business involving agricultural commodities are receiving the brunt of public criticism. “We are already seeing companies and investors with exposure to deforestation-risk commodities, such as timber, beef, or palm oil coming under much greater public scrutiny in export economies like Brazil, Mozambique, Myanmar, Colombia and Liberia,” Nichols said. “And recent examples suggest ignoring deforestation concerns in 2018 will have consequences.”

In recent examples, the world’s largest meat company, JBS SA, was accused of buying cattle raised on illegally deforested land and paid the price when its share value, credit rating, and reputation sank so low that it shelved an IPO. In Malaysia, IOI Corporation (one of the country’s largest conglomerates) temporarily lost its sustainable palm oil certification and suffered through an 18% drop in value, US$1.3bn loss in market capitalisation, and the desertion of several high-profile customers, the CDP said.

Companies are beginning to learn from others’ mistakes. Conagra Brands, a North American food company, stated that failing to lead in sustainably sourcing forest-risk commodities would affect its bottom line as shareholder activism and compliance actions have the potential to negatively impact shareholder confidence and stock price.

Extractives sector
Again, fossil fuels are well-understood to harbour grave reputational risks to companies operating in the extractives sector, but deforestation threats are increasingly subject to public scrutiny. “Witness Brazil’s abrupt U-turn after initially opening Amazon forests for mining,” Nichols said. “Read the headlines across the globe condemning Ecuador’s state oil company for its role in deforesting the Yasuní National Park.” The warning signs clearly indicate that ignoring deforestation risks will have severe consequences in the year ahead.
SHARE