The average cost of comprehensive motor insurance in the UK has surged by 3% year-on-year compared to the same quarter in 2018, according to the latest Confused.com Car Insurance Price Index in association with Willis Towers Watson, which is based on price data compiled from nearly six million customer quotes per quarter.

Compared to £788.70 in the second quarter of 2019, the average cost of comprehensive motor insurance in the UK has fallen by 1% to £783.28 in the third quarter with premiums dropping in most UK regions. However, the year over year figures represent a less promising story for drivers. 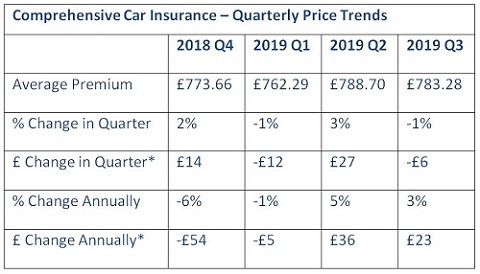 “The fluctuations in premium levels seen across recent quarters, although relatively minor, reflect the significant uncertainty in the industry at the moment arising from both the implications of the personal injury discount rate change announced in July and the FCA’s (Financial Conduct Authority) interim report on general insurance pricing practices,” noted Graham Wright, UK lead of P&C (property and casualty) personal lines pricing at Willis Towers Watson.

“In particular, the FCA’s report identifies a number of potential remedies, each of which will have some impact on pricing decisions for insurers in the next few months.”

Wright added that the industry is also still grappling with inflation challenges and uncertainty around the effects of the Civil Liability Act.

Meanwhile, in terms of towns or cities, Llandridod Wells was described as the location offering the best value for car insurance. The Welsh town also enjoyed the biggest quarterly decline in premiums, at 28% to £499. East London, on the other hand, is the UK’s most expensive place to purchase coverage (£1,371).

“There is a lot going on within the insurance industry which is having a tug-of-war effect on prices for new and existing customers,” said Confused.com data insight head Steve Fletcher. “From the unexpected continuation of a negative Ogden discount rate, higher claims costs, and current economic uncertainty surrounding Brexit, prices are being pushed up.

“But there are also fewer younger drivers on the road and more people car-sharing. This, combined with more advanced and efficient analytics to help determine prices, is pulling prices down.”

Which technologies will have the biggest impact on insurance?