by Paul Lucas 24 Jan 2017
SHARE
It was just yesterday that we revealed statistics on the university areas of the UK with the most burglaries within a one-mile radius of the campus itself (see article), but what about burglaries irrespective of university locations?

According to new data released by moneysupermarket.com, the UK has a clear burglary claims capital – London is head and shoulders above the rest in this ignominious list.

The comparison website analysed 1.8 million home insurance quotes over the last two years and identified the postcodes with the highest and lowest rates of claims for home contents theft over a five-year period. It found that North East London’s Redbridge (IG4) has jumped from third spot in last year’s rankings to take the top position this time around. However, despite this unwanted leap to the gold medal spot it’s not all bad news for Redbridge – because its overall claim rate has actually dropped by 4% compared to the previous year.

For North London though, there is little good news with its postcodes dominating the rest of the top five - Whetstone (N20), Chadwell Heath (RM6) and Clayhall (IG5) all make an appearance. Leeds (LS5) is the only area outside the capital to feature at the top end of the list, taking fourth place.

One of this year’s notably big movers was Cambridge (CB5), which jumped into position 12 this year having previously been outside the top 20. Chorlton-cum-Hardy in Manchester (M21) also featured alongside Leeds (LS8), with the rest of the top 20 dominated by London.

At the other end of the scale, of the postcodes with at least one claim for theft, Monkseaton in North Tyneside (NE25) and Bideford in Devon (EX39) shared the lowest rate, with 0.9 claims per 1,000 quotes. There were also 123 postal districts with zero claims, including Norwich (NR26), Liverpool City Centre (L3), Manchester City Centre (M1), and Montrose (DD10) in Scotland.

“It is encouraging to see the overall rate of burglary claims has dropped 8% in the last year, in line with the fall in recorded burglaries,” said Kevin Pratt, consumer affairs expert at moneysupermarket.com. “That’s no doubt thanks to improvements in home security, although the falling cost of electrical items, such as TVs, might be significant as, simply put, there’s less need for burglars to steal items than in the past.” 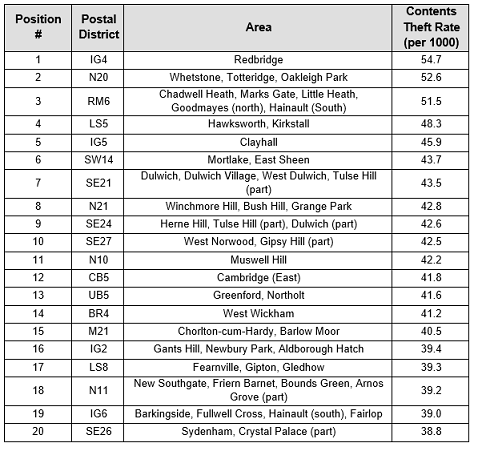 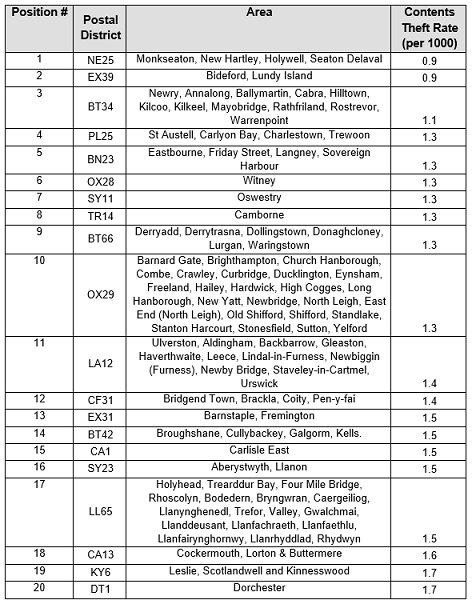