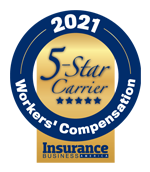 Worker’s compensation policies are, by their very design, standard. From a policy-coverage standpoint, there are very few broadening options with standard coverage, brokers told us.

‘This is by design. (The National Council on Compensation Insurance) NCCI and the other rating bureaus have standardized this form. The limit on the policy is not meant for a claim for an employee – it’s meant to pay lawsuits or third parties. This is one policy that rarely has any changes because most cases are settled in court/rely on precedents.’

With that limitation in mind, these are the policies voted best in the country by experienced workers comp insurance brokers.

What coverage does workers’ compensation provide?

Workers’ comp can also cover repetitive injury on the job. Injury like carpal tunnel syndrome, for instance, can develop over months or years. In that case, workers’ comp can help cover ongoing care bills and other costs. In addition, workers’ comp coverage can provide benefits to employees who are temporarily or permanently disabled on the job, to help pay for medical bills and replace lost wages.

How does the workers’ compensation coverage claim process work?

Workers’ compensation claim process varies from state to state, but regardless of your location, it is crucial to begin claim processing immediately following a work-related illness or injury. Important requirements for each company to know are to ensure injured or sick employees receive immediate medical care; employees should notify employers about work-related injury or illness immediately; and employers need to contact workers’ comp providers to submit a claim (and, depending on your state, notify state-run workers’ compensation board). Afterward, the company’s provider reviews the claim and approves or denies benefits.

What is the average settlement for workers’ compensation?

Most often, employees who fill out claims will get a reimbursement – and there are specific approaches that can help employees receive larger settlements across the board. An employee, once offered a settlement amount, has the option to negotiate the workers’ comp terms and payout amount. Typically, if the employee accepts the first offer, he or she will receive much less than countering for a higher amount. Even starting negotiations, in many instances, can compel insurance companies to significantly increase the workers’ comp payout amount.

What does workers’ compensation not cover?

How long does it take to reach a settlement for workers’ compensation?

From filing a claim to receiving payment, the entire settlement process can take anywhere from 12-18 months, depending on the details of the case and whether the employee has legal representation. If the employee does not have legal representation, does not have a permanent disability, and does not wind up negotiating a settlement, the timeline reduces slightly to roughly 12-14 months. The settlement process typically takes longer with a lawyer, from roughly 17-18 months, or 20% longer – but with a more favorable outcome.

Do you get a lump sum from workers’ compensation?

However, it is important to understand the workers’ comp settlement process. Occasionally, an injured worker may refuse the initial offer and choose, instead, to hire a lawyer and pursue a larger settlement.
If this is possible, then why doesn’t every injured employee do this to get more money for the injury? Answer: if the employee decides to pursue a workers’ comp settlement, the chance also exists that they could be awarded less than what was initially offered by the insurer.

What happens if you get caught working while on workers’ compensation?

An injured worker may be able to continue working a second job or take a separate job while collecting workers’ compensation – if neither will aggravate the employee’s injuries. For instance, if a worker was injured when doing physically demanding work, he or she may be able to take a less physically demanding job. In that case, taking an employee’s added income into account, the insurer will adjust his or her workers’ comp benefits.