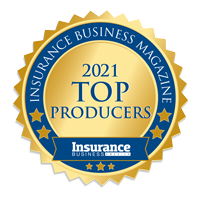 Every cloud has a silver lining, and the cloud of 2020 is no exception. Thanks to COVID-19, hurricanes, wildfires and civil unrest, the net income of US insurers dropped roughly 25% year-over-year during the first nine months of 2020, according to the Insurance Information Institute (III). Yet despite the overall bearishness of the market, insurers delivered an estimated $14 billion in premium relief to auto insurance clients, donated nearly $300 million to charities and largely retained the industry’s 2.8 million-strong US workforce – all with only modest increases in premiums, according to III CEO Sean Kevelighan.

Kevelighan told attendees at the virtual 2021 Catastrophe Risk Management Conference in March that “2020 proved how this industry can lead through disruption. We can adapt. We can innovate. We can keep our promises and pay claims – even during a global pandemic.”

In an additional silver lining, many individual producers have done quite well for themselves over the past year. IBA’s seventh annual Top Producers list features 128 producers from around the country, all of whom reached the $1 million threshold in commission revenue in 2020. Of these, 15 producers crossed the $4 million mark, and one even cracked $11 million. While most of this year’s Top Producers are veterans with more than 11 years of experience, the group also contains a solid showing by individuals new to the industry. From entertainment industry entrepreneurs to transportation experts and real estate gurus, these 128 men and women represent some of the best and brightest talent the US insurance industry has to offer.

The importance of expertise
One of this year’s highest-grossing producers is Robby McGehee, president of Smith McGehee Insurance Solutions in Clayton, Missouri, who entered the industry after a stint as a race-car driver.

“I graduated college in 1997 and continued my dream to race cars professionally,” he says. “I was blessed to be able to say I got to live my childhood dream when, after years of preparation at the lower levels, I had an opportunity to drive in the 1999 Indianapolis 500, where I finished fifth, received the Rookie of the Year Award and was propelled into a five-year career of earning my living driving 200-plus every weekend.”

Throughout his racing career, McGehee also worked in IT at his father’s insurance company, which was sold in 2004, the same year he got out of racing. McGehee stayed on and, in 2011, opened Smith McGehee Insurance Solutions, where he specializes in construction liability.

“We had our best year under COVID,” he says. “There was a three-month period where new development paused, and we paused with it. But when it turned back on, so did we, and it came back good.”

McGehee attributes his competitive advantage to three principles he learned from his father: honesty and integrity, business knowledge, and a willingness to serve.

“Buying the client a beer at the ballpark is fun, and I do it, but it’s not in the top 10 reasons of why we work together,” he says.

Rather, one of the key reasons McGehee has been able to maintain a loyal client base is that he not only provides cost-effective insurance coverage, but also spends a good chunk of his time talking with general counsels and attorneys about all types of claims.

“It’s certainly not exciting,” he says, “but that’s when it matters, and the clients know this.”

Going forward, McGehee says he’s focused on growing his business and in-house talent. The only things that can keep him from producing more, he says, are limited capacity and having less energy as he gets older.

His advice to those producers just getting into the industry? “Learn the business,” he says. “Be the best at the product you’re selling. If I go into a room to talk about insurance, if I’m not the smartest guy, we’ve got a problem! There are very successful producers who depend on supporting expertise. I would say to gain the expertise your-self. Just my way of doing it – no way is wrong if the business comes in.”

Building relationships
Another of this year’s highest-grossing producers, Annie Fleming, studied risk management and insurance at the University of Georgia before embarking on a 17-year-plus career specializing in insurance for the real estate, construction, hospitality and retail industries. She’s currently the managing director of the hospitality and real estate unit at Beecher Carlson.

Fleming says the pandemic has propelled her to discover new and creative solutions to optimize connections with clients and markets. But while the technology is great, she says, nothing will ever completely replace in-person interaction with clients, under-writers and industry partners, which she feels is the best way to solidify the trust that’s essential to relationships in this industry.

“I am passionate about partnering with clients to help them solve complex problems,” Fleming says. “I work to involve my clients in the development and implementation of strategies, negotiations, and overall process, enabling us to fully understand each organization’s goals and objectives and help to achieve them. I believe in white-glove customer service as well. While the renewal process is extremely important, so is the day-to-day customer service of an account. I take this very seriously and personally.”

In the current market, she says, certain risks have become increasingly challenging, but Beecher Carlson has designed and implemented solutions and structures that are popular with clients.

“We believe in analyzing a client’s total cost of risk, not just selling insurance,” Fleming says. “The more complex an account, the more we are able to excel by structuring unique solutions for our clients.”

Looking ahead to the remainder of 2021 and 2022, Fleming plans to further expand her book of business with best-in-class insurance and risk management programs and by offering superior customer service. And she can’t wait to travel again and meet face-to-face with clients and business partners.

For young producers just starting out in the industry, Fleming advises them to “focus on your clients and align with a mentor. Focusing on your clients keeps you working toward your and your clients’ shared goals and objectives and helps you to deliver the best insurance programs and solutions possible. Aligning with a mentor can help you to establish a direction for yourself and to develop your career.”

Now in its seventh year, Insurance Business America’s Top Producers list highlights the best-performing insurance professionals from around the country. Starting in January, IBA invited producers to nominate themselves for the 2021 list.

To qualify as a Top Producer, producers must have achieved at least $1 million in commission revenue in 2020, with at least 50% commercial P&C business and demonstrated year-over-year growth from 2019. Each nominated producer was required to provide specific details about his or her business to be eligible. 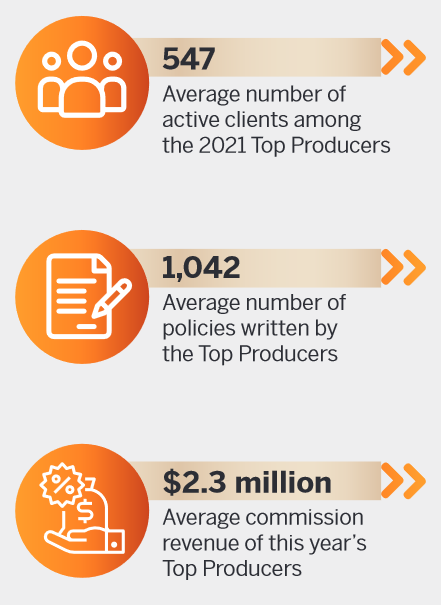