The following is an opinion piece written by Holly Tachovsky, CEO of BuildFax. The views expressed within the article are not necessarily reflective of those of Insurance Business.

The housing market’s collapse in 2008 brought with it a litany of entirely predictable consequences. A decline in retail spending, record foreclosures, unprecedented loss in home values, rising unemployment, ongoing credit tightness, and more led to global economic stagnation and contraction. The recession and its disastrous side effects also forced US homeowners to reframe how they invest in their homes.

2010 marked the beginning of a different tendency among US homeowners, one that saw a shift in preference from new construction to the remodeling of existing structures. Residential remodels have increased by about 30% from 2010 to now, growing at about 5% annually, according to BuildFax remodeling data. 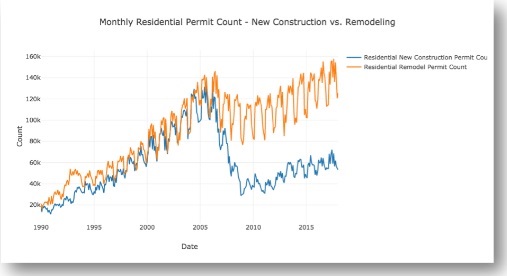 This shift in remodeling preferences—which shows no signs of abatement—suggests that insurance carriers face increased risk of premium leakage as more properties throughout the country are no longer insured to value. As remodeling activity continues to increase, premium dollars lost to inaccurate or outdated data around individual properties will grow exponentially if carriers fail to quickly analyze premium-impacting upgrades, improvements, alterations, additions and other similar types of remodels.

Carriers traditionally review their books of business every three to five years to run replacement costs and determine updated premium prices. As remodeling activity continues to increase, the simple fact is that a carrier’s ability to maintain accurate data on its book of business is simply outpaced by the sheer scope of the remodeling boom. This is true even of the best replacement cost calculators that account for building material costs, key property characteristics and other critical property features, but which lag based on the speed at which remodeling work currently occurs. This is happening year after year after year, and as the US moves deeper into this shift, carriers will soon find themselves struggling to maintain an accurate book of business.

To date, carriers have relied on agent outreach or surveys, home inspections, tax assessor data or, in some cases, have been forced to trust information provided by the homeowners. For carriers, these traditional methods of maintaining an accurate view of the properties under policy are cumbersome, unsustainable at scale and oftentimes do not provide the most accurate data: Agent outreach utilizes too much human capital at scale; home inspections are costly, ranging anywhere from $30 to $1,000 per property; and tax assessor data is updated too infrequently to make intelligent decisions.

The reality is that very few people alert their home insurers of significant remodels that would affect policy conditions and premium prices, meaning that it falls squarely on the carrier’s shoulders to find cost-effective and data-centric ways to detect and compensate for changes to a property.

In areas like Florida, which is not only home to a higher density of remodeling projects in such cities as Miami, Jacksonville, Tampa and Orlando, but also faces greater exposure to natural disasters, failure to report even small upgrades greatly increases risk for carriers as well as policyholders.

In a recent analysis of over 100,000 policies, BuildFax honed in on the policies that experienced material change and asked that carriers review those premiums. Of the policies the carriers reviewed, increased exposure ranged from about $25,000 to $53,000 per property. For some of the largest carriers that hold policies on hundreds of thousands or millions of homes in high-risk areas, the potential for massive, unrecoverable loss becomes more daunting as the remodeling boom persists.

Detecting and accounting for change in property condition over time—and accurately reflecting that change through premium price—rarely incentivizes a policyholder to leave and can actually help avoid customer churn. The vast majority of policyholders want the changes they’ve made to their homes or properties to be accurately reflected in their coverage. By communicating clearly and transparently with policyholders about property changes and their subsequent impact on premium prices, carriers will build trust with property owners while maintaining more accurate books of business.

Unfortunately, premium leakage won’t be stop-gapped anytime soon. A recent BuildFax analysis found that, from 2010 through the beginning of 2017, post-sale remodels have increased by 54% compared to post-sale remodels from 2002 to 2009. In comparison, pre-sale remodels have only increased by 13%. As homeowners continue to gravitate toward remodels rather than new construction, carriers will inevitably continue to stack risk year after year unless they’re able to accurately account for premium leakage. Conversely, however, it becomes a valuable incremental revenue opportunity for carriers willing to invest in data-first methods that can accurately detect property changes over time at scale.

Holly Tachovsky is the CEO and co-founder of BuildFax, the leading provider of property condition and history insights. Under Holly’s leadership, BuildFax’s database has grown to more than 70% national coverage and encompasses more than 23 billion data points on commercial and residential properties. She is an avid mentor in Austin and beyond, having consulted with more than 100 early-stage companies.

What does it take to be a top specialist broker?