While it might not always make headlines, the insurance industry is well known for its fundraising and community involvement efforts. In 2017, the Insurance Industry Charitable Foundation’s (IICF) Week of Giving involved almost 10,200 industry volunteers in 173 cities, who donated more than 28,800 hours of services to non-profits and community organizations in the United States and United Kingdom.

Within their four walls, insurance organizations are also putting on their own fundraising events. At its national sales meeting, managing general agent, underwriting manager, and wholesale insurance broker Risk Placement Services (RPS) wanted to make a positive impact on the communities that host its teams during the three day-long event.

Since it kicked off back in 2017, RPS’s national fundraising challenge has netted thousands of dollars for charity. In 2017, the company raised $60,000 for Ronald McDonald House of South Carolina, and, in 2018, $70,000 was raised for Roots of Music in New Orleans. This paid for a full year of rent for the organization’s new building, and all new musical instruments for its students.

In 2019, RPS topped itself once again, when the company collected over $87,000 for the Ronald McDonald House of Nashville, which equated to more than 20,000 nights for families staying at the house.

While the efforts at the national level have been successful, individual RPS offices also put on their own charitable initiatives. A few years ago, the Atlanta office was looking for ways to give back to its communities. Lindsey LeClair, area vice president and casualty broker, started the office’s charity committee made up of 10 people from different divisions in the office, and though the group had good intentions, it wasn’t easy to get the ball rolling.

“We went overboard the first year – everybody had different ideas, so we tried to do one [event] a month, which was very overwhelming for me as well as everyone else,” said LeClair.

However, when the group hit its stride, they managed to pull off some exciting events. A local assisted living home was located in RPS’s own backyard, so the office collected items, from dishwater detergent to non-perishable food to socks, for about three months and turned it into a friendly internal competition to see who could collect the most things. After all was said and donated, these items ended up lasting the assisted living home for six months.

“They were able to pay for their medication and not have to worry about the everyday necessities that came across their plate,” explained LeClair.

Soon after, RPS leaders decided to help out local communities during the company’s national meeting, and called on LeClair and the committee to help out, since the Atlanta office is also where much of RPS’s senior management is based.

“We were new to the whole national fundraising effort, so we did a local [event] where we asked a couple of carriers to donate some large items that we could raffle off, and we raised money that way,” said LeClair. “Fast forward to this year, we created a national fundraising committee to try to get someone from each area of the country to help relay these efforts back to our 80+ offices.”

Seeing the team’s efforts pay off, as each office competed to raise the most money, and bring positive change to communities has nonetheless been the best prize.

“It’s such a great feeling when you can give back and you see where the money is going,” said LeClair, adding that people working for the Ronald McDonald House of Nashville thought that even $10,000 raised would make a huge difference. “There’s something to be said about actually being there when the check is presented to these people and they have no idea. You can imagine the look on their faces when they found out we raised [over] $87,000.”

With its community involvement expertise, the RPS team has key dos and don’ts to pass on to other insurance professionals hoping to kick-start their own fundraising efforts. In the Chicago office, the team organized a ‘dollars for denim’ campaign, where employees could donate a dollar to wear jeans in the office during the week – the money then went to the Red Cross. When the company’s efforts went national, the team found it useful to pick people in each region to help ignite awareness.

“We were able to spread this information, and put together a very thoughtful message to go with it. Instead of just forwarding the information on how to donate and sending it to carriers or clients, [we were] actually taking time to put together a sample email that could be sent out,” said Maddie Beja, associate broker in property at the company’s Chicago office, who also helped lead the winning team in the national fundraising competition.

Choosing an organization local to the city in which the competition was held also ended up being a good move to engage employees in the effort.

“It’s easy to write a check and then you don’t know where it’s going,” said Beja. “It goes to a large organization and you don’t really know the effect that it will have, but having the opportunity to be in the city presenting the check and really seeing a little bit more closely what it’s going to do I think really resonated with a lot of people.”

Not all charity events require months of planning. During the 2019 national meeting, the RPS team put on a relay race to raise additional funds for the Ronald McDonald House. Teams of brokers got together to compete, and onlookers could bid on teams to make their obstacles harder. 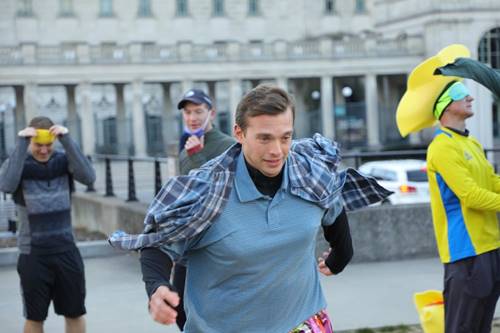 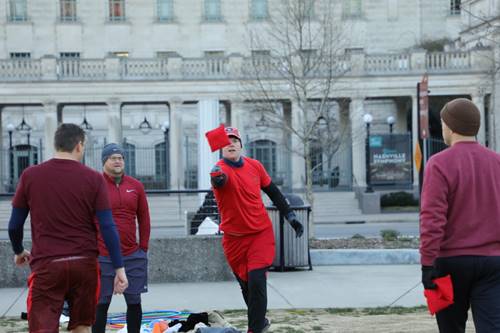 Community involvement already aligns with the values of many insurance companies, which is to help people during difficult times and put lives back together. Combining that mission with the competitive nature of many insurance professionals is a recipe for success.

“The wholesale world is a very cutthroat, competitive world. We all want to win, so we turned our business mentality into that competition across all the whole company,” said LeClair. “The insurance industry as a whole as I’ve seen it has been very eager and willing to volunteer locally as well as nationally. We get involved in a lot of fundraisers with our local carriers, so I do think that it runs the gamut, as far as the culture of the insurance industry and raising money for charity going hand in hand.”