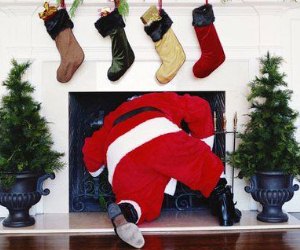 The muddy overnight visitor
One homeowner claimed damage to a carpet caused by sooty footprints left on Christmas morning. Proof of Santa, perhaps? No, a hungry squirrel had apparently been tempted down the chimney by the array of nuts left out in the fireplace.

Santa’s stolen vehicle
An insurer received a report that Santa’s sleigh had been stolen.

“Apparently, Santa stores his sleigh at a gift shop in Connecticut and this was stolen from the rear of the store,” adjuster.com wrote about the case, reported on its site. “The sleigh is actually part of a holiday display at a gift shop.

“But, can you imagine having this loss come across your desk??? What would the insured value of Santa’s sleigh be???”

Christmas stuffing
A six-year-old cocker spaniel, Suki, wolfed down 12 mincemeat pies during the Christmas holidays, including the foil and the packaging. When the dog’s owner returned home that evening, the dog was lying on her back, feet in the air, and reportedly “twice the size she usually is.”

The next day, the vet recommended pills that would help the dog pass the foil. The insurer covered the cost of the pills and the visit to the vet, but the policy did not cover the cost of cleaning her car.

Interactive video games
Any families intending to buy a Nintendo Wii this Christmas should take heed of the accident that befell two youngsters insured by Home & Legacy, according to the dailymail.com.

Perhaps too intently focused on the game, the kids threw the handset of their new Nintendo Wii through the equally new plasma-screen TV. The insurer paid out £1,000 for a replacement.

Beware of the flying Christmas tree
AA Car Insurance reported that a claimant was driving home from Christmas shopping when, on a bend, a car approached in the opposite direction with a large Christmas tree badly tied to the roof.

“He was driving too fast and I saw the tree lift off and it flew straight at me,” the claimant reported. “The trunk made a great dent in my bonnet and caused me to run off the road and into a hedge. The chap didn't stop and he never came back for his tree!”

Lighting up the tree
One man attached candles to his Christmas tree and left the room. The tree caught fire, which spread to the rest of the house. The man claimed £330,000 damage on his home insurance policy. No word on whether the insurer paid out.

Christmas cooking gone bad
A claimant reported opening the oven holding a baster and a pair of oven gloves. But the turkey was heavier than expected; it flew out of the oven and onto the floor. It looks like the three-second rule applied, as the family enjoyed the remnants of the mess, while the insurer paid out for a new carpet.
Elsewhere, another carpet claim involved a report of “exploding” Christmas puddings.